The Council Chamber was one of the very first rooms that Henry VIII added to Hampton Court Palace after he took over the palace. The room measures c. 4,8 (16 feet) metres in length and width and there are just about 3 metres (10 feet) to the ceiling. Because there are only three windows the room is not very well lit for most of the day - the only other source of light is the open fireplace. It was in this very room that many of the important decisions in Henry's reign were made.
The floor itself is colourful which was remarkably popular during the Tudors and has been decorated with a modernized Tudor rose. Today the room is hung with blue velvet and the King's throne is placed at the centre (of course) surrounded by a circle for the councillors. 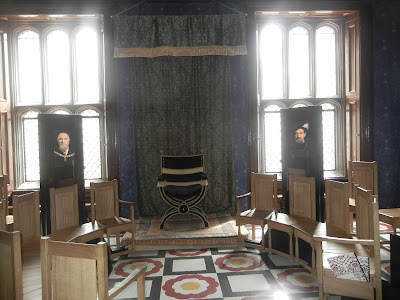