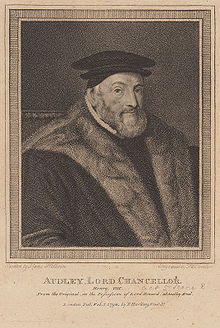 Born in Essex in 1488 as the son of George Audley, Thomas Audley was to make his way into the very inner circle of Henry VIII's government. After finishing his law education he became a Justice of the Peace in Essex around 1521. This seemed to have sparked his career in politics for just two years later he represented Essex in Parliament. From here on his career kept rolling.

Cardinal Wolsey took him into his household and in the late autumn 1529 he was appointed Chancellor of the Duchy of Lancaster - that same year he also assumed the title of Speaker of the House of Commons which meant that it was him who held this position when Henry VIII finally broke from Rome. Being a true courtier he soon saw where the wind - or rather the King's will - was blowing and made sure to be on the right side. This meant that he would soon become a key figure in the attacks on the catholic clergy in England as well as one of the minds behind the Act of Succession. For this he was rewarded with no only a knighthood but also the coveted position of Lord Keeper of the Great Seal - it is no surprise that he also supported Henry VIII's marriage to Anne Boleyn. However, Thomas Audley had a habit of changing his colours and could easily adapt to whatever the King's will might be disregarding moral standards - something that would keep his head on his shoulders. That is why it is not surprising that he just a few years later he played a great part in the executions of Thomas More and Bishop Fisher as well as the trial and consequent execution of Anne Boleyn - he was actually present during her execution.

It was also Thomas Audley's hands who drew up the first suggestion for the new Act of Succession before he aided in the death sentences of the rebels of the Pilgrimage of Grace. Then another title was bestowed on him in 1538 when he became Baron Audley of Walden and acted as Lord Steward in three more trials of nobles that would lead to executions. He married twice: first to Christina Barnardiston and second to Elizabeth Grey. It is believed that he was a supporter of the reformation but - of course - still managed to pass Henry VIII's Six Articles of Faith. "Knight of the Garter" was his next title and he would be made one in 1540 shortly before he arranged the attainder that brought about the downfall of Thomas Cromwell. By this time time was running out for Thomas Audley and he must have known. He resigned the Great Seal on 21 April 1544 and died just nine days later.
Indsendt af Louise Boisen Schmidt kl. 10/22/2013 03:56:00 pm No comments: