The Great Hall is an amazing example of Tudor architecture and taste. The walls are still hung with the best tapestries in Henry VIII's vast collection depicting the Story of Abraham - faded through the years but still beautiful. The tapestries under the gallery depicts the Story of Hercules and the Triumph of Fate. The Hall is indeed great to step into. It measures 33 metres (108 inches) by 12 metres (40 feet).

Henry VIII added the Great Hall to Hampton Court Palace in 1532-35 and it would become the last medieval Great Hall built for any English monarch. The most characteristic about this large hall is the large wooden beams at the ceiling - the initials of Henry VIII and Anne Boleyn is still a part of the decoration.

When Henry VIII reigned this was the most important room of the entire castle - seen through a courtier's eyes. This is were the King would dine on a dais overlooking his court - in fact Henry was so impatient with this particular room that he made the masons work at night by candlelight as well as all through the day! Shakespeare performed a play of his in front of James I on New Years-day 1603 - the same year that Elizabeth I died. 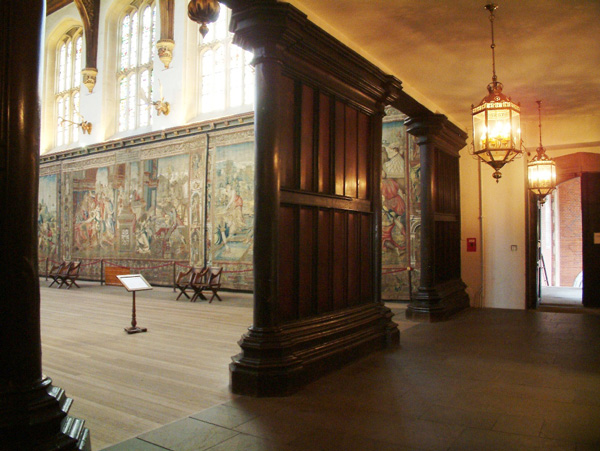 Email ThisBlogThis!Share to TwitterShare to FacebookShare to Pinterest
Etiketter: great-hall