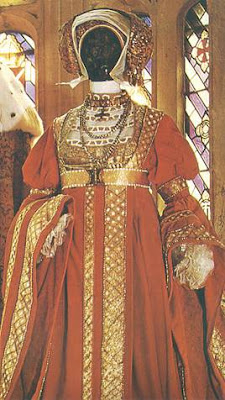 Elvi Hale wore this gown as Anne of Cleves in the BBC production of "Six Wives of Henry VIII" from 1970. From the look of it BBC paid a lot of attention to getting the dress as historically correct as possible. And if you are wondering where on earth you have seen this dress before then take a look at the official portrait of the actual Anne of Cleves.
The rich red fabric is quite possibly velvet. It is mainly the amount of gold on the dress that indicates Anne's new status - notice the odd pattern at the edge of the sleeves, hanging from the waist and surrounding the bodice. The high waistline (we would call it an empire cut) was not used in England at this time which just added to the "strange" look that Anne is said to have portrayed. Also, it is very rare to see a noblewoman of this age wear a belt since it was not a part of the common attire. Another thing that sets the dress apart is the lace-work above the neckline that ends around the choker necklace. An Englishwoman would normally just have bare skin. 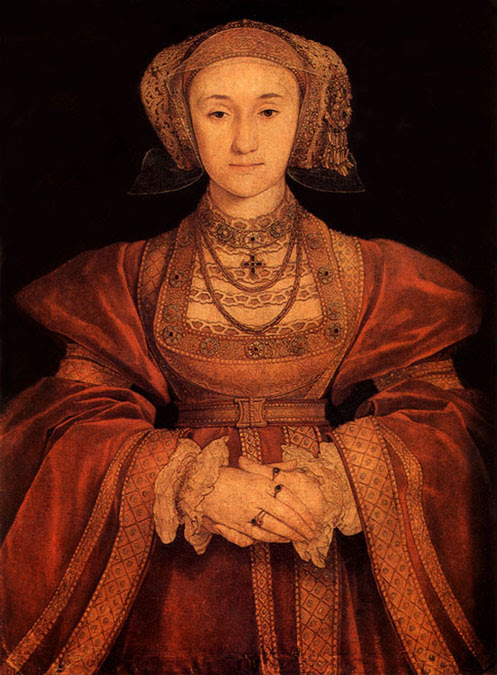 Besides the large amounts of brocaded golden fabric Anne also wears three necklaces: two heavy gold chains and a choker with a cross pendant. From underneath the heavy sleeves the frizzled chemise appears with its white fabric.
And then there is the hat. Unfortunately, I do not know much of German fashion during this particular time period so I will let it be up to your eyes to describe it.

Email ThisBlogThis!Share to TwitterShare to FacebookShare to Pinterest
Etiketter: costumes-anne-of-cleves