The Tudors and their Trees

It may seem odd but there actually are a few connections between the Tudors and different trees. Let's take a look at how they are connected... 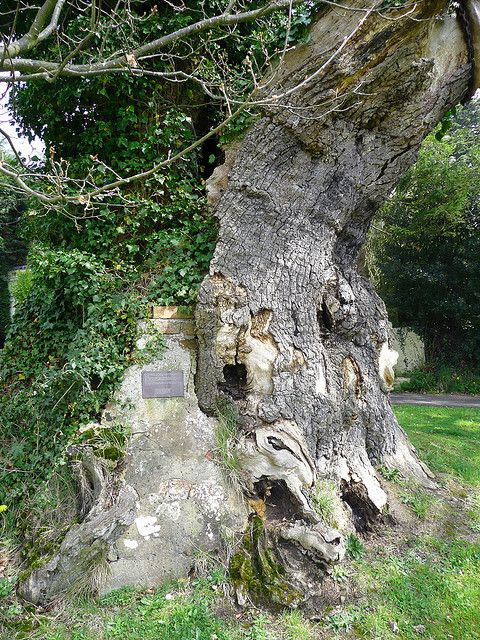 This tree is known as "the Queen Elizabeth Oak" and is located in Northiam, Sussex. Elizabeth I stayed here on her way to Rye in 1573 and decided to eat her meal in the shade of the oak. When she was done she left her shoes behind. These green damask shoes - with a heel of 2,5 inch - still exits and are exhibited at Brickwall House. The little plaque next to the tree informs visitors of the oak's royal past.

And it was under an oak tree that Elizabeth first heard the news that she was now Queen of England. The actual tree is long gone but Queen Elizabeth II herself planted a new tree on the exact spot of the old one to honour the memory of her namesake. The new (and old) oak tree was placed at Hatfield House where Elizabeth had been under house arrest. The to-be Queen was either eating an apple or reading when courtiers suddenly rushed to her side and bowed down to her. She then dropped gracefully to her knees herself - having risen at the sight of the courtiers - and made her famous quotation in Latin: "This is the Lord's doing and it is marvellous in our eyes."

Another little tidbit is about Elizabeth's doomed mother Anne Boleyn. Her ghost is said to appear at her childhood home Hever Castle in Kent where she roams around a large oak (perhaps a family favourite?). As it happens this was one of the trees under which Henry VIII courted Anne before their tragic marriage. Legend has it that the couple even danced around the tree. Despite this link to Anne Boleyn and Henry VIII the tree is also known as "the Queen Elizabeth Oak" (the names have been ground for confusion)

Email ThisBlogThis!Share to TwitterShare to FacebookShare to Pinterest
Etiketter: titillating-titbits