Richard Rich was born in London but exactly when is unknown - sources placed Richard's age as 54 in 1551 which would place his birthday at 1497. His father was Richard Rich (Baron Rich was surely named after his father) and Joan Dingley. We know that he acted as a lawyer in 1516. At the time Cardinal Wolsey was enjoying great power at court which attracted many hopeful young men who wished to advance in the world. Richard was one of these men who wrote to the Cardinal to ask for his patronage. However, it was not Cardinal Wolsey but Thomas Audley who procured the a place as Member of Parliament for Richard in 1529. 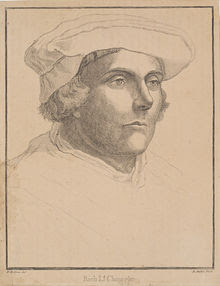 Audley's friendship would prove valuable to Richard and in 1533 he was knighted and was given the title of Solicitor General under the service of Thomas Cromwell - this position would mean that Richard would be a part of the demolishing of the monasteries. Rich's legal education meant that he became involved with the trials of both Thomas More and Bishop Fisher - later Richard would also work for the downfall of Thomas Cromwell. It was Richard Rich who went to Kimbolton Castle where Catherine of Aragon had been exiled to. He was to make an inventory of all the ex-Queen's possessions as well as providing Henry VIII with legal advice as to how the King could claim her possessions.

This work for Henry VIII paid off and on April 19 1536 he was made Chancellor of the Court of Augmentations. Of course there was a material up-side as well. The former priory of Leighs was transferred into Richard's possession as well as hundreds of manors in Essex. Richard was a catholic; something he would continue to be during the reigns of the Protestant Edward VI and Elizabeth I. The infamous trial of Anne Askew was closely tied to Richard as well. Along with Chancellor Wriothesley, Richard personally turned the wheels of the rack used to torture Anne Askew.

Richard remained a faithful servant to Henry VIII and would become the first Baron Rich following his contribution to the will of Henry VIII. In March 1547 he became Chancellor. Richard knew where the reins of power would lay after the death of Henry VIII and soon proclaimed his support of Edward Seymour as Lord Protector. He would assist Edward in the prosecution of Thomas Seymour and the strict politics of the Lord Protector. But when the situation became grave in 1549 Richard left court for Warwick. He would see the fall of yet another great man when he presided over Edward Seymour's trial in the last month of 1551 - a month later Richard resigned as Chancellor.
Despite his official resignation of the title of Chancellor Richard still possessed power at court. Being a catholic he gained the favour of Mary I for whom he would aid in the prosecution of Protestants. Richard had a talent for surviving and even remained at a powerful position during Elizabeth I. On June 12 1567, Richard Rich died.
Indsendt af Louise Boisen Schmidt kl. 5/05/2013 09:44:00 pm