Thomas Wolsey was born in Ipswich around 1475 to the butcher Robert Wolsey and his wife Joan Daundy. His father provided a good education for Thomas who eventually went to Magdalen College in Oxford. In 1498 he was ordained and was now officially a part of the clergy and from then on his career took off. Just four years later he was the chaplain of the Archbishop of Canterbury who took Thomas with him on diplomatic mission. In 1507 he entered the service of Henry VIII - luckily for Wolsey the King was becoming more open-minded towards people from humble origins. 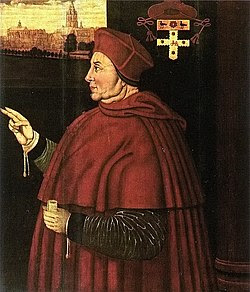 Henry VIII would be crowned King of England two years later and he took the talented Wolsey with him. Apparently, Wolsey had become very good friends with the King who openly showed his appreciation of Wolsey by making him a part of the Privy council. The two of them had just what the other needed - Henry was not that interested in governmental affairs during his younger years and Wolsey had the skill and interest to take care of that. 1514 saw the elevation of the ordained Wolsey to the title of Archbishop of York and merely a year later there was no doubt that the new archbishop was a force to be reckoned with - Henry chose that year to make him Lord Chancellor when Warham resigned.

As a man in a powerful position Wolsey slowly but efficiently got rid of his enemies. It is widely believed that he was the mastermind behind the fall of Edward Stafford, Duke of Buckingham and he had several other courtiers tried for adultery through the ecclesiastical court. He even came to the rescue of Charles Brandon and Mary Tudor after they had married in secret and was in danger of the King's wrath; Wolsey convinced the King that he should not execute them but befriend them instead.
Wolsey's rise to power was also evident when he was made a Cardinal by Leo X - a post that made the newly appointed cardinal seem untouchable. It was due to Wolsey that the Field of the Cloth of Gold was a succes and the cardinal himself planned every detail of it.

When England's greatest ally, King Ferdinand of Spain, died and was succeeded by Charles V it was a hard blow to the English power on the European continent. But Wolsey saw an opportunity to increase British influence. The pope was eager to gather a new crusade and Wolsey used his position within the church to create the Treaty of London by which it was clear that it was Wolsey (and consequently England) that organized a huge pace summit between twenty European nations. This brought England back into the game that was European politics and power - France seized the opportunity and signed a treaty with the rising England just two days later.

His many powerful positions earned Wolsey a great fortune. He spent a large part of it on rebuilding Hampton Court Palace and decided to found a college at Oxford named Cardinal College (today it is called Christ Church). But the cardinal was haughty and many courtiers hated his arrogance - it was made even worse when you considered his lower background. In this way Wolsey made many enemies within court.
Despite being a cardinal of the Roman Catholic Church Wolsey had always been King Henry's servant first and intended to keep things at that. Henry VIII was by this time becoming increasingly desperate at the lack of a male heir when the King saw a way out of his marriage to Catherine of Aragon - that way took the form of Anne Boleyn. Consequently, Henry turned to Wolsey and demanded that he used his influence as a cardinal to secure papal approval of a divorce.

Wolsey was - as always - at the King's command. He appealed to the pope and presented three different reasons as to why the pope should grant the English King his divorce. The first was that the original papal dispensation that had been created when Henry VIII wanted to marry Catherine (who was his brother's widow) was defect. Wolsey pointed to the fact that the dispensation was in obvious contradiction to the book of Leviticus that clearly stated that a man could not marry his brother's widow. His second argument was that the original dispensation was worded in a wrong way. Wolsey's final appeal was that the decision should be decided in England and that he - as a papal legate - would supervise the trial. The pope agreed to the last and sent two papal legates to England including Cardinal Campeggio. But Campeggio was old and the journey took a long time; when he finally arrived Campeggio delayed the trial so much that it had to be put to a hold in July 1529. 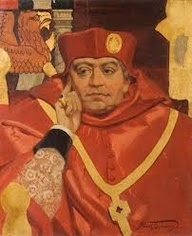 This failure sealed Wolsey's fate. His increasing unpopularity had spread to Anne Boleyn's supporters who now saw him as a direct hindrance to her way to the throne and the King was tired of Wolsey's failure to secure the annulment. In 1529 Wolsey was officially stripped of his title as Lord Chancellor and his magnificent castle of Hampton Court Palace which then went to the King. Wolsey was allowed to keep the title of Archbishop of York and consequently travelled to Yorkshire. But on his way he was ordered back to London by Henry Percy, the Duke of Northumberland.

The Cardinal hastily turned around and headed back to London but fell ill. On November 29 1530 Thomas Wolsey died - it was probably the best that could have happened to him for it is almost certain that a trial would have awaited him in London. A trial he could not win.
Indsendt af Louise Boisen Schmidt kl. 4/07/2013 10:34:00 am