Just imagine how many dresses you can collect during a 45-year reign. Like any other renaissance ruler she was expected to show off her wealth and status through her clothes. Of course, everyone at court knew of Elizabeth's love for clothes which made it natural to acquire items of clothes for the Queen on her birthday and at Christmas. Very little of the Queen's vast wardrobe survives to this day; the main reason for this is that the dresses were so expensive that bits and pieces were often reused to create a new look and some gowns were given away as gifts. When Elizabeth died she owned 2000 dresses!

Even with these 2000 dresses Elizabeth spent less than a fifth of some of her male predecessors on clothes. Of course, it helped that many courtiers would gladly give her clothes or jewels to adorn her outfit with, sparing her the expense of buying them herself. Some historians has suggested that her love of clothes is a result of the time after her mother's execution when she struggled to put clothes on her back. What made her dresses so valuable - besides the expensive fabrics - was the ornaments and decorative elements. Tassels, braids and pearls were among the things used to adorn the Queen's wardrobe - and it worked; the constellation of gemstones on her dresses made her sparkle when she moved.

Elizabeth believed that a courtier should dress according to rank but not above it. In times when the economy was poor she would scold her courtiers for their spendings on items of clothing. Surprisingly enough Elizabeth loved to wear black and white dresses - naturally these would be lavishly decorated with ornaments or embroideries. The Queen's clothes was a complex matter. It consisted of a chemise, a corset, a fathingale, stockings, the gown itself, sleeves, a neck ruff and sleeve ruffs!

As it is with almost all the Tudor jewels we can only know them through portraits. Most of Elizabeth's gowns were lost to history but we can still get an insight into the Virgin Queen's Wardrobe (these are just a few of the many portraits of her): 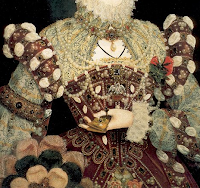 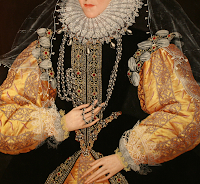 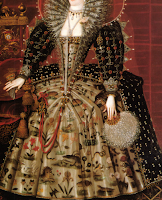 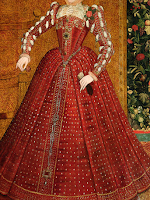 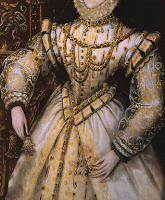 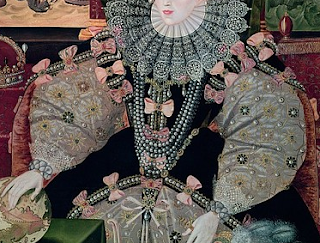 Email ThisBlogThis!Share to TwitterShare to FacebookShare to Pinterest
Etiketter: fashion