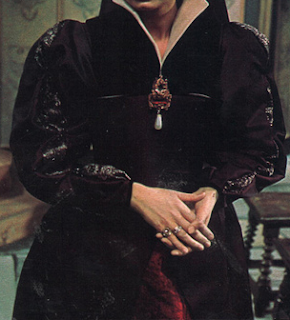 Angela Pleasence portrays Katherine Howard in BBC's "Six Wives of Henry VIII" from 1970. This costume is based on the Toledo portrait of the doomed fifth Queen of Henry VIII.
The gown itself is of dark purple damask and the collar (that appears to be of a black fabric) is stiffened in order to make the collar stand up and frame the face. Also, the collar itself has been lined with white silk that contrasts the dark colours of the gown. The petticoat is wine-red.
The main focus of the gown is the beautiful pendant fastened at the middle of the bodice. The ruby matches the petticoat and the drop-pearl lights up the outfit.
Although her head is not a part of the photograph to the right, "Katherine" is wearing a French hood in the same cream colour of the lining of the collar.

Email ThisBlogThis!Share to TwitterShare to FacebookShare to Pinterest
Etiketter: costumes-katherine-howard