Was Anne of Cleves really a Flander's Mare? 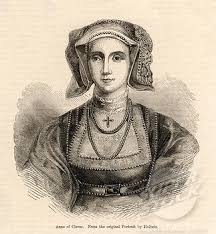 Ever since Henry VIII discarded Anne of Cleves on the grounds that he thought she looked more like a "Flander's Mare" than the pretty portrait by Holbein, it has been believed for centuries that the German princess was very unattractive. So unattractive in fact that the King could not bring himself to consummate their marriage. But is it true - was Anne really that ugly? Let's take a look:

The English diplomat Christopher Mont was at the German courts and was thus able to hear a thing or two about the appearance of Anne of Cleves (her brother had still not allowed the English lords to look at his sisters). Christopher never actually saw Anne herself but he reports that:

Everyman praiseth the beauty of the said Lady, as well for the face, as for the whole body. She excellelth as far the Duchess of Milan as the golden sun excelleth the silver moon.

Another contemporary - and possibly more reliant source - was the French ambassador at the English court Charles de Marillac. Since it was not a French princess he had no reason to be inclined to lie about what he saw. After seeing Anne he said that she looked to be around 30 years old (she was actually just 24) as well as tall and thin. He wrote that she was:


Of middling beauty with a determined and resolute countenance.

He went on to comment that she was not as beautiful as people had claimed her to be (mirroring the thoughts of Henry VIII) and continued with:

Henry VIII had been completely taken in by the portrait of Anne by Holbein and there is a good reason for that. Holbein was infamous for his ability to depict people exactly as they looked without the flattering that normally was applied when dealing with aristocratic people. Actually this was why Henry had sent Holbein to  paint her - he wanted to be sure that he got what he saw. Several accounts states that Holbein had actually succeeded in cathcing Anne of Cleves' image in his portrait and if that is the case it can be difficult to see why she was thought to be ugly.

There is another contributor to this "ugly image" that has clung to Anne of Cleves for centuries now: her clothes. The German fashion that Anne wore when she arrived in England was anything but flattering - compared to the elegant French fashion and the cosier English fashion it was downright clumsy.
After the divorce of the German princess and the English King descriptions of Anne of Cleves paints a picture of a woman who is not unpleasant to look at - it has to be stated that these accounts probably are more correct since it was no longer necessary to flatter the ex-Queen. When Henry decided to marry Catherine Parr it has been noted that Anne of Cleves was irritated by the fact that her former throne was being taken over by a woman "less attractive than herself". Since no one contradicted her it might have been true.

Recent discoveries have shown that Holbein actually changed Anne's nose in her portrait. X-rays of the portrait reveals that she originally was portrayed with a longer nose but even at that it was not larger than normal - it matches the length of Jane Seymour.

Finally there is the matter of her skin complexion. One of the things that apparently threw Henry most off was the fact that she was a lot "darker" in her complexion than what he had been informed. The long journey across the English channel had damaged her fine complexion - or that was at least what the courtiers could come up with.
So there is nothing that suggests that Anne of Cleves was terribly ugly. It is more likely that she was indeed a "middling beauty" that is not ugly but not extremely beautiful either.
Indsendt af Louise Boisen Schmidt kl. 4/06/2013 11:46:00 pm