The Pilgrimage of Grace

One of the greatest rebellions during Henry VIII was undoubtedly the Pilgrimage of Grace.  The King and Thomas Cromwell had set the Protestant Reformation in motion which had meant the closure of many abbeys and convents all through England. Especially northern England was known to be particularly attached to the Catholic faith. But the rebellion was not against Henry VIII as a monarch but at the very changes that swept through the country.

It all began in Lincolnshire at St. James Church on October 1 1536 where the frustration due to the closure of the abbeys became too much for the inhabitant of Louth to bear. The rising spread to other villages nearby  who demanded that the King's Ten Articles should be removed and the monasteries restored. About 40.000 led by minor gentlemen occupied Lincoln Cathedral. But the uprising was short-lived. By October 14 Henry VIII announced that if the rebels did not disperse he would send the Duke of Suffolk (Charles Brandon) and his forces to settle the matter - only a few remained after a threat such as this. The local leaders were hanged, drawn and quartered as was the punishment for treason.

The Lincolnshire rising may have died out but the movement behind it had not. One day before Henry VIII's public threat - October 13 - the Pilgrimage of Grace began. This new uprising was based on several complaints from the northern populace:
First of all the harvest of 1535 had been poor which had increased the food prices and the Statute of Uses did not help to improve the situation.
Secondly, the people was not pleased about the King's marital affairs. They had not liked how the King had discarded Catherine of Aragon in favour of Anne Boleyn but when Anne Boleyn was executed it was the last drop. The charges against her were clearly trumped-up and lacking any real evidence which was too much for the northern people to cope with - one Queen was bad, but two was too much.
Last - but definitely not least - was the issues with Cromwell's religious reform. As stated, the church meant the world to northern England to whom it was the very centre of community life. When rumours began circulating that a new tax on baptism would be enforced the people could no longer ignore it - combined with the dissolution of the monasteries, the Ten Articles and the new prayers it changed too much too fast.

Every uprising have to have a leader and the Pilgrimage of Grace was no exception. Robert Aske was chosen to be the head of the rebellion. In 1536 Robert Aske had gathered 9.000 rioters and headed for York; the city would be occupied by the rebels soon after. Robert Aske also arranged for the previous monks and nuns to return to the monasteries from which they had been evicted - this was a direct defiance of the King's will. Several noblemen who shared the rebels desire to maintain the Catholic faith began to negotiate with Aske who was now supported by 30-40.000 people - the noblemen in question was Thomas Howard, Duke of Norfolk and George Talbot, Earl of Shrewsbury. King Henry VIII instructed the Duke of Norfolk to offer the rebels a royal pardon from the King himself and the assembly of Parliament at York. The offers were delivered and Robert Aske dismissed his followers - you have to remember that the rebellion was not against the King and that the people still supported him.

But not all of the northerners shared Robert Aske's conviction that the King would be true to his word. A new rebellion broke out in Cumberland and Westmorland and this new rebellion was named the Bigod's rebellion. The King reacted promptly and arrested Aske (Henry VIII was convinced that Robert Aske had known about the new rebellion), Lord Darcy, Lord Hussey and other leaders. To the Duke of Norfolk, King Henry wrote:


You must cause such dreadful executions of a good number of the inhabitants [...] hanging them on trees, quartering them and setting their heads and quarters in every town, as shall be a fearful warning.

Lord Darcy and Lord Hussey were beheaded for their involvement. Sir Robert Constable and Sir Francis Bigod were hanged at Tyburn and Thomas Moigne (Member of Parliament) was hanged, drawn and quartered in March 1537. Robert Aske had pleaded the King not to be hanged, drawn and quartered and the King agreed - but Robert Aske's altered punishment was not much better: Robert Aske was hung in chains from York Castle.
In total the rebellion ended with the executions of 216 people including several knights, munks, priests and members of the nobility. Actually, Henry VIII emerged from the rebellion as more powerful than ever - he had successfully struck down a rebellion without losing any of his royal power or authority.

These are some of the nobles that were executed and how they met their ends:


Here are some illustrations of the Pilgrimage of Grace: 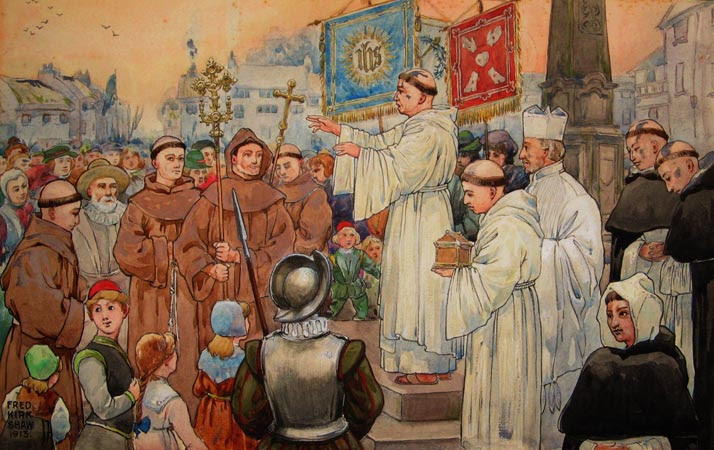 Email ThisBlogThis!Share to TwitterShare to FacebookShare to Pinterest
Etiketter: rebellions-and-assassination-attempts