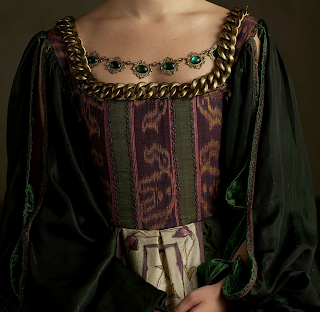 Joss Stone portrays Anne of Cleves on "the Tudors" in which she wears this gown. It is different from other gowns on the show because Anne is wore German clothes at first which had a completely different style. The bodice is made of vertical stripes of moss green and purple with golden patterns (the one in the middle looks a bit like an elephant..). The dark green sleeves are not just very voluminous but has been cut open to show the arms - the openings are trimmed with braidings. 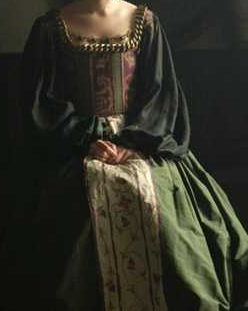 The neckline really stands out with its thick golden braiding from shoulder to shoulder. Instead of opening up to reveal a petticoat, the green skirt is completely closed; a piece of cream fabric with roses makes up for the "missing" petticoat. It almost seems as if the golden chain with the green emeralds has been sewn into the dress. The entire mixture of fabrics and patterns must have seemed very strange to the nobles at Henry VIII's court.
Indsendt af Louise Boisen Schmidt kl. 6/05/2013 07:17:00 pm

Email ThisBlogThis!Share to TwitterShare to FacebookShare to Pinterest
Etiketter: costumes-anne-of-cleves