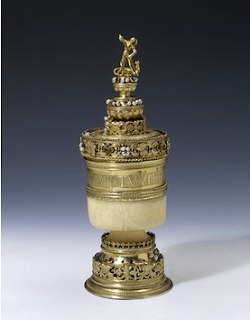 The Howard Grace Cup was made in London between 1525-26. The bowl is made from elephant ivory and the rest is gilded gold and silver adorned with pearls and gemstones. A grace cup was normally used when giving thanks for a meal. The gold mount is dated between 1525-1526 but it is possible that the ivory bowl was from the 12th century. It has been in the Howard family's possession since 1614 - hence "the Howard Grace Cup".
The style is a mixture between Tudor-style and the Gothic. Several Latin inscriptions can be found on the cup including: "Be Sober", "Fear God" and "Drink Thy Wine With Joy".
Indsendt af Louise Boisen Schmidt kl. 6/05/2013 08:28:00 pm

Email ThisBlogThis!Share to TwitterShare to FacebookShare to Pinterest
Etiketter: artefacts