Hatfield House as it stands today was completed in 1611 - that is after the death of Elizabeth I. But the old castle played an important part in the royal Tudor's life.
It was build in 1485 - the same year that Henry VII became King - by John Morton, the Bishop of Ely. The Banqueting Hall is the main remainder of the old palace.

It was one of the many houses owned by Henry VIII (he bought it in 1538) who used it to house Prince Edward, Princess Mary and Princess Elizabeth. But it was Elizabeth who has the greatest connection to the place. Her childhood there was happy and she would participate in her younger brother's education. However, when Mary I became Queen Hatfield House was transformed into a "country prison" for the threat that was Elizabeth. While staying there in 1558 she was informed that her sister had died and that she was now Queen of England.
The famous Rainbow Portrait of Elizabeth I is stored at this house and is one of the greatest examples of Tudor iconography. The portrait was painted when the Queen was in her later years but she appears as young as ever - it was to give the impression that she was immune to ageing. The text "Non Sine Sole Iris" means "No Rainbow Without the Sun"; the sun being Elizabeth which is another attempt at signifying her importance. 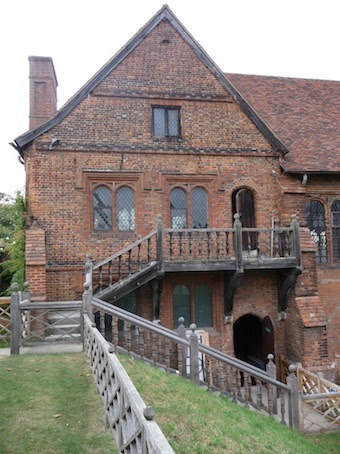