Margaret Pole was born on August 14, 1473 to George Plantagenet and his wife, Isabel. Henry VII arranged for her to marry Sir Richard Pole between 1491 and 1494 but the exact year is unknown. The marriage produced five children, one girl (Ursula) and four boys including Reginald Pole, Henry Pole, Arthur Pole and Geoffrey Pole. Sadly Sir Richard died in 1505 and Margaret was left a widow. But before that - in 1499 - Margaret suffered another personal loss when her brother was killed by Henry VII himself in what can only be described as a judicially murder. 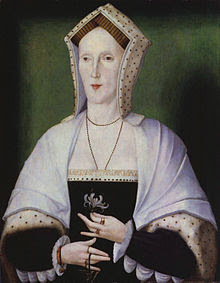 With her husband and her brother dead, the future might have looked a little dark for Margaret but that changed when Henry VIII became King of England. He considered Margaret to be "the most saintly woman in England" and felt that she had been greatly wronged by the murder of her brother. Consequently, the newly crowned King  first gave her an annual income of 100 pounds in 1504 and in 1509 went so far as to create her Countess of Salisbury - a title that came with large land areas. But it was not enough for Henry yet. He cleared her brother's name and gave back Margaret the full rights that belonged to her family. However, the gifts were not always just a blessing. Large land areas meant payment to the monarch which caused Margaret to pay 1000 pounds in 1512 to Cardinal Wolsey as payment for the King's wars and later, in 1528, she had to pay 2333 pounds! This was an enormous amount of money.

Margaret was the governess of Princess Mary but soon found herself and her family in possible danger. The Duke of Buckingham was executed in 1521 and it would seems as if Margaret's sons were under suspicion too since they kept a low profile for a while. Margaret herself was not asked to leave her post and accompanied Princess Mary to Wales. During her time with Mary she must have become somewhat attached to the young Princess. In 1533 Henry VIII had married Anne Boleyn and reclaimed jewellery from Catherine of Aragon as well as Mary - but Margaret refused to hand over the jewellery which caused her to be discharged from her post. Margaret may have seen something of herself in Mary (or at least the devotion to God) because she proclaimed that she would continue to live with her at her own expense.

In 1536 Anne Boleyn was executed and Margaret returned to court. But just as everything seemed well again, her son Reginald Pole decided to give the King a book with "offending" context. Margaret knew only all too well how the King could react especially seen in the light of the recent bloodshed. She appears to have been deeply disturbed by Reginald's actions and even proclaimed that she considered him a traitor. Letters later revealed that she had not lost all affections for her son. Storm clouds were gathering over the Pole family because Henry VIII - who knew that they disliked his policies - had vowed to destroy the entire family.

The King made his move in 1538 with the arrests of Lord Mantague (Henry Pole) and Geoffrey Pole. Henry VIII or someone else at the pinnacle of power had installed a spy in Margaret's household that would now tell several damaging stories about the activities of the family. The Earl of Southampton and the Bishop of Ely was promptly send to question the Countess. After an entire day of interrogation she had still not caved so she was transferred to the Earl of Southampton's house at Cowdry - her possessions where confiscated. During a search of her house papal bulls and certain letter was discovered. This was enough to spark a series of new interrogations. It was not until March of 1539 that she finally received a visitor (she was still at house arrest at the Earl's house). It was actually the Earl himself who came but his visit brought no joy to the Countess as she was taken to the Tower. Geoffrey Pole had been pardoned but Henry Pole had already been executed at this time.

Margaret Pole was no longer to be titled "Countess of Salisbury" and she would remain in the Tower for two and a half years. Surprisingly enough, she had not been executed despite an attainder in 1539 and the fatal found of a badge that belonged to the Pilgrimage of Grace. But her "safety" was not to last for long and when another rebellion broke out around York in 1541 her time had run out. In the early hours of May 27 1541, the former Countess was informed that she was to die within a few hours. Margaret refused to die as a traitor since she was none (her own words) but she still went calmly with the guards to the Tower green. The King had not arranged for a scaffold to be erected; there was only a low block for her to put her head on. Margaret refused to lay her head down on the block when the executioner asked her to so she was forced down. The executioner was clumsy and inexperienced and panicked at the struggle of the woman before him. He swung his axe but hit her in the shoulder rather than the neck and it took ten more blows to sever Margaret's head from her body.