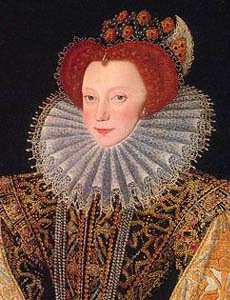 Lettice Knollys was born in 1540 in Oxfordshire but the exact date is unknown. Lettice's mother, Catherine Carey, was the daughter of none other than Mary Boleyn which made Lettice Elizabeth I's cousin. Very little is known of her childhood and her youth; actually it is not until the reign of Mary I that Lettice's life changed dramatically. Her family had to flee to the Continent to escape Mary's religious persecutions. Luckily for them, Mary's reign was short and the family could return home when Elizabeth became Queen - apparently, they made an impression on the new Queen because Sir Francis Knollys (Lettice's father) was named Treasurer of the Royal Bedchamber and Lettice a maid-of-honour to Elizabeth herself.

If there is one thing that can be said for sure about Lettice Knollys then it must be that she was beautiful. She had naturally red hair and porcelain skin which was the ideal beauty for an Elizabethan woman. This, combined with a natural sense of fashion, caused her to be the centre of attention - something that made Elizabeth I very jealous. She was married off to Walter Devereux and left court to live in her new home in Staffordshire where she gave birth to the couple's five children. Her status was considerably raised when her husband was made Earl of Essex in 1572. While her husband performed his duties in Ireland, Lettice embarked on an affair with Robert Dudley, Earl of Leicestershire. Sadly, her husband never returned home and his death was rumoured to be a result of poisoning.
Lettice was at that time pregnant with Robert Dudley's child and the couple married in secret on September 21, 1578 - apparently, Lettice's father had insisted that they married rather than seeing his daughter give birth to an illegitimate child. When Elizabeth I found out she was furious and banished Lettice from court; she was only to return once. Lettice had given birth to a son - named after his father - but he died at just five years old. In 1584 her husband died as well which threw Lettice into grievance - their marriage is reputed to have been happy. But life goes on and Lettice married Sir Christopher Blount a year later. Elizabeth I still had not forgiven Lettice for her secret marriage to Robert Dudley and remained resentful of her throughout her life.

However, the Queen's strong contempt for the mother did not stand in the way for her son, the Earl of Essex, to become the Queen's last favourite. When Essex attempted to raise a riot Lettice's husband joined in which resulted in his execution in 1601. Lettice would move to Drayton Bassett where she would die on December 25, 1634.
Indsendt af Louise Boisen Schmidt kl. 6/05/2013 08:15:00 pm