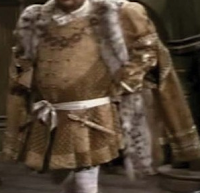 Charles Laughton plays Henry VIII in "Young Bess" from 1953 in which he wears this costume. The main material is gold - golden fabrics in both terns and nearly paisley. The sleeves opens up to reveal the white linen shirt underneath. Also, several lines of different fabrics has been used to adorn the sleeves. However, the white satin band around the "majestic" waist is unusual - normally a belt would have been used. Notice the dagger hanging from the satin; it is also golden. The real Henry VIII had a fondness of fur (since it was a sign of wealth) and this attire follows that particular taste. Pieces of white/grey furs lines the cape that is otherwise kept in a slightly darker beige than the outfit.

The middle photo reveals 18 golden buttons - however these are not featured on the exhibition photo of the costume beneath. The look is topped off with the heavy golden chain with what appears to be pearls at the centre. Email ThisBlogThis!Share to TwitterShare to FacebookShare to Pinterest
Etiketter: costumes-henry-viii