The Execution of Mary, Queen of Scots

On the night of February 7, 1587 at Fortheringhay Castle Mary Stuart was informed that she had been found guilty in treason and was to die the next die. Having received the news, Mary wrote a letter to her brother-in-law King Henri of France.
She was woken around 8 in the morning on February 8 and taken to the great hall of the castle where she was to be executed. The dethroned Scottish Queen wore a long black cloak as she entered the hall. But Mary had not performed her last act of drama yet: when she removed the cloak, she revealed a scarlet dress. Red is the colour of martyrs in Catholicism and by wearing this particular colour she made it clear to all the spectators that she considered herself a martyr for her beliefs. After ridding herself of her cloak, she kissed a crucifix.
Mary, Queen of Scots then knelled before the block where she was blindfolded. The executioner cut off her head with two blows from his axe and then held up her severed head saying: "Such end all the Queen's and the Gospel's enemies". It was at this moment that one of Mary's small lapdogs was discovered underneath her skirt, covered in its mistress' blood. Her body was buried in Peterborough Cathedral where it would remain until her son, James I of Scotland, had her moved to Westminster Abbey.

The following is an account of the execution by Robert Wynkfielde:


"Her [Mary queen of Scots] prayers being ended, the executioners, kneeling, desired her Grace to forgive them her death: who answered, 'I forgive you with all my heart, for now, I hope, you shall make an end of all my troubles.'  Then they, with her two women, helping her up, began to disrobe her of her apparel: then she, laying her crucifix upon the stool, one of the executioners took from her neck the Agnus Dei, which she, laying hands off it, gave to one of her women, and told the executioner he should be answered money for it.  Then she suffered them, with her two women, to disrobe her of her chain of pomander beads and all other her apparel most willingly, and with joy rather than sorrow, helped to make unready herself, putting on a pair of sleeves with her own hands which they had pulled off, and that with some haste, as if she had longed to be gone.
All this time they were pulling off her apparel, she never changed her countenance, but with smiling cheer she uttered these words, 'that she never had such grooms to make her unready, and that she never put off her clothes before such a company.'
Then she, being stripped of all her apparel saving her petticoat and kirtle, her two women beholding her made great lamentation, and crying and crossing themselves prayed in Latin.  She, turning herself to them, embracing them, said these words in French, 'Ne crie vous, j'ay prome pour vous', and so crossing and kissing them, bade them pray for her and rejoice and not weep, for that now they should see an end of all their mistress's troubles.
Then she, with a smiling countenance, turning to her men servants, as Melvin and the rest, standing upon a bench nigh the scaffold, who sometime weeping, sometime crying out aloud, and continually crossing themselves, prayed in Latin, crossing them with her hand bade them farewell, and wishing them to pray for her even until the last hour.
This done, one of the women having a Corpus Christi cloth lapped up three-corner-ways, kissing it, put it over the Queen of Scots' face, and pinned it fast to the caule of her head.  Then the two women departed from her, and she kneeling down upon the cushion most resolutely, and without any token or fear of death, she spake aloud this Psalm in Latin, In Te Domine confido, non confundar in eternam, etc.  Then, groping for the block, she laid down her head, putting her chin over the block with both her hands, which, holding there still, had been cut off had they not been espied.  Then lying upon the block most quietly, and stretching out her arms cried, In manus tuas, Domine, etc., three or four times.  Then she, lying very still upon the block, one of the executioners holding her slightly with one of his hands, she endured two strokes of the other executioner with an axe, she making very small noise or none at all, and not stirring any part of her from the place where she lay: and so the executioner cut off her head, saving one little gristle, which being cut asunder, he lift up her head to the view of all the assembly and bade God save the Queen.  Then, her dress of lawn falling from off her head, it appeared as grey as one of threescore and ten years old, polled very short, her face in a moment being so much altered from the form she had when she was alive, as few could remember her by her dead face.  Her lips stirred up and down a quarter of an hour after her head was cut off.
Then Mr Dean [Dr Fletcher, Dean of Peterborough] said with a loud voice, 'So perish all the Queen's enemies,' and afterwards the Earl of Kent came to the dead body, and standing over it, with a loud voice said, 'Such end of all the Queen's and the Gospel's enemies.'
Then one of the executioners, pulling off her garters, espied her little dog which was crept under her clothes, which could not be gotten forth but by force, yet afterward would not depart from the dead corpse, but came and lay between her head and her shoulders, which being imbrued with her blood was carried away and washed, as all things else were that had any blood was either burned or washed clean, and the executioners sent away with money for their fees, not having any one thing that belonged unto her.  And so, every man being commanded out of the hall, except the sheriff and his men, she was carried by them up into a great chamber lying ready for the surgeons to embalm her."

Here are some depictions of Mary, Queen of Scot's execution: 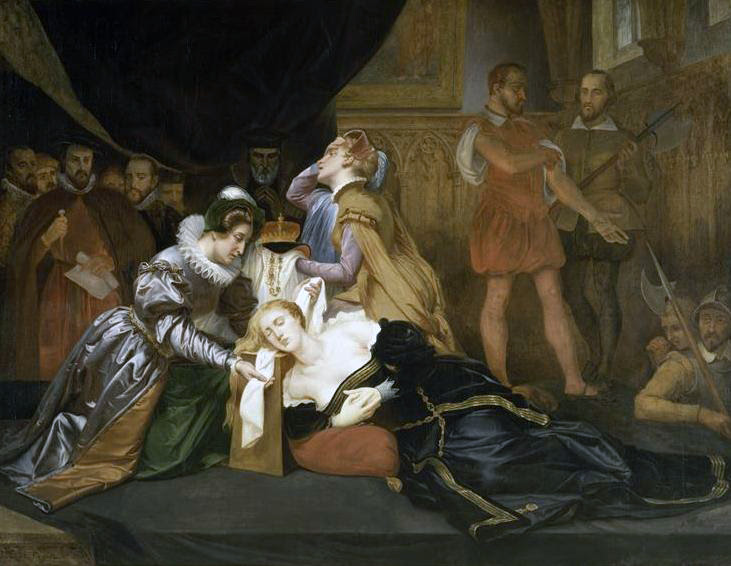 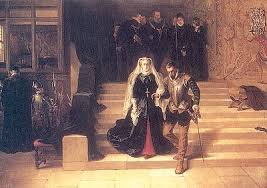 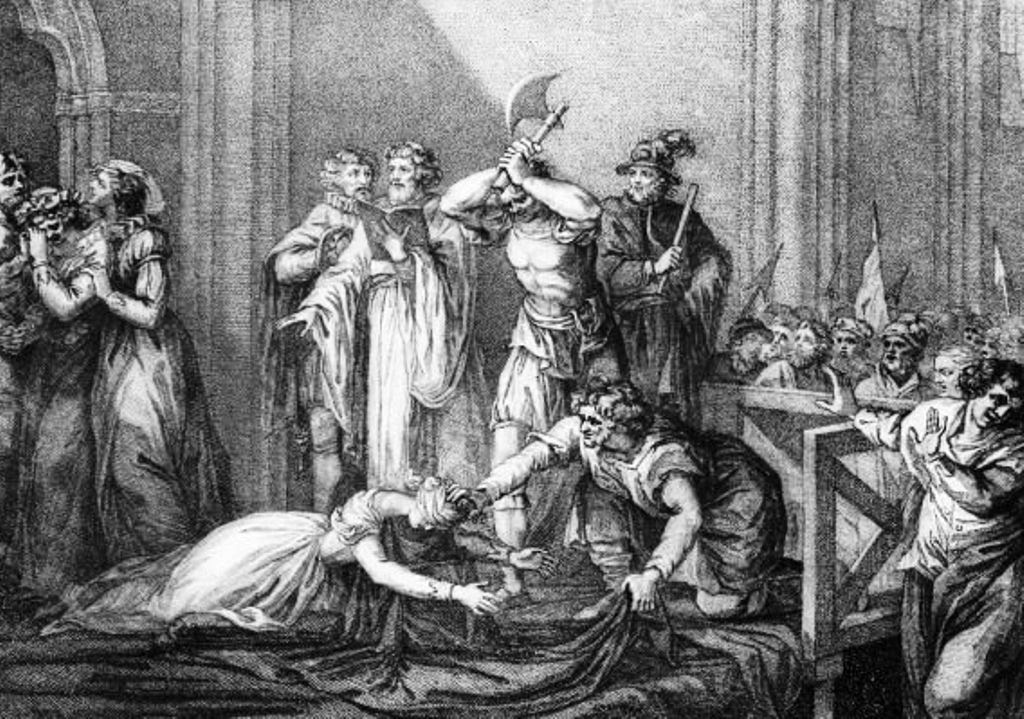 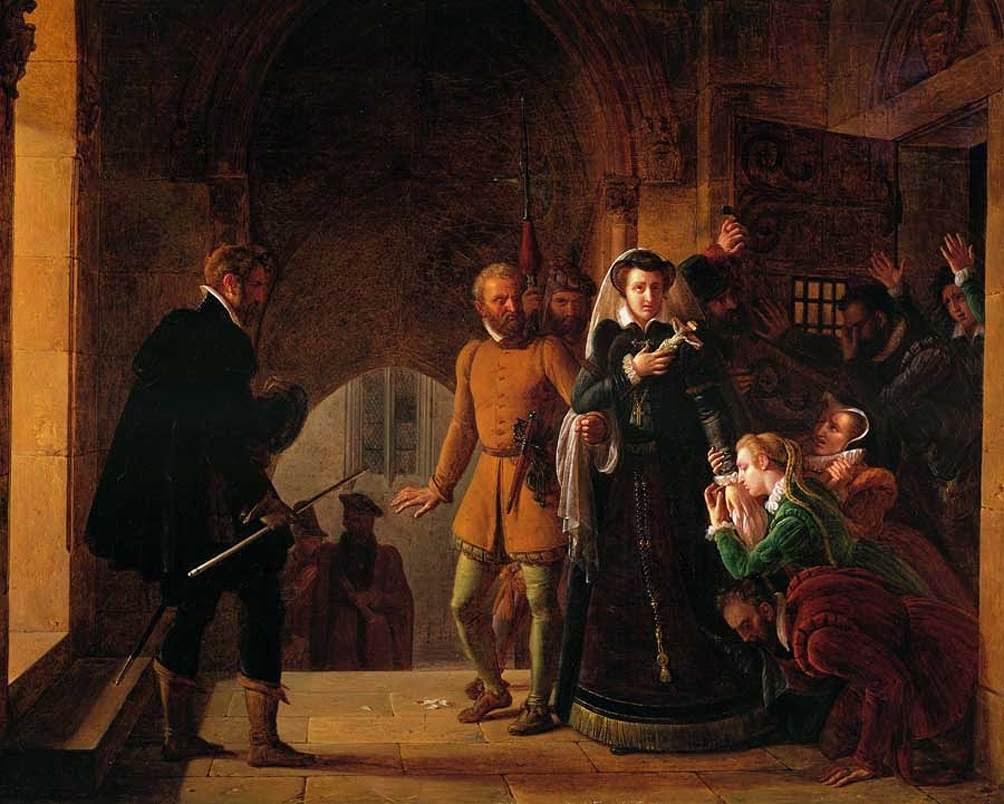