A Different Side of Mary 1

Mary I is remembered as a very strict and religious woman whom only the court fool could make laugh. But Mary had inherited some of her father's love of luxury and the entertainments offered by a court. She had two great fancies: luxury clothing and gambling. 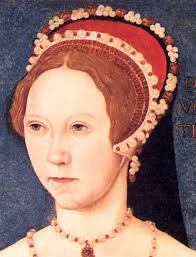 Like her father, Mary I loved expensive clothing and would order gowns made from the most luxurious fabrics of the time. The first year always meant that the Grand Wardrobe saw it's expenses raised considerable due to the coronation which demanded the very best of clothing for the newly made monarch. Mary I's first year as Queen of England was made even more expensive because she did not just need an elaborate dress for her coronation but a just as splendid one for her wedding. In total her cost on her Grand Wardrobe amounted to 18.000 pounds that year!
Later on her expenses on that account would drop to 6.000 pounds which was a bit less than Henry VIII's during the last years of his reign.

Mary's second passion was for gambling - something it is difficult imagining the highly religious and morally strong Mary indulging in such a thing. But Mary I was lucky enough to have rather large sums to bet with. Unfortunately, she was not always on the winning side which resulted in a rather embarrassing behaviour of a Queen of England: Mary was placing money on a game of bowls but had run out of founds, so she asked her servants to borrow her more! But they refused and Mary - determined to continue playing - decided to wage the breakfast of the next day. Apparently the Queen lost again for according to her book attests: "Payed for a Brekefaste loste at Bolling by my lady Mary's grace."
Indsendt af Louise Boisen Schmidt kl. 2/17/2013 10:31:00 am