The Boy King - the long-longed for son

Prince Edward was the son that Henry VIII had always wanted - and gotten rid of two wives for. When he was born on October 12th 1537 his mother, Jane Seymour, immediately rose in Henry's affection. But the young Prince never knew his mother who died just eleven days after giving birth to him.

Edward was a healthy baby and Henry doted on him. Despite the image of him as a sickly boy, he was actually of a rather good health and grew very fast as a child. The only real health issue - before his final illness - was a poor eyesight. Henry VIII wanted desperately to keep the child safe from both diseases and assassination. Edward was placed in the care of Lady Bryant and his household was run by Anne Stanhope's (Edward Seymour's wife) stepfather. Visitors who came to visit the Prince was met with an extremely clean household and a child that had all the toys he could imagine - nothing was to be missing for the King's only son.

Edward began his formal education when he was six years old and was instructed by Richard Cox and John Cheke. His education would focus on "learning the tongues, the scripture, and all liberal sciences" - in the Prince's own words. Edward had an interest in geometry and soon got a grasp on monetary affairs which could be a sign that he was an intelligent boy. When it came to religion, the future King was brought up in a household that preferred the reformed religion which would come to have a great impact on Edward's religious views. By 1549 Edward wrote a thesis on the pope being the Antichrist.

The child had a good relationship with his two sisters Mary and Elizabeth. At one time the King invited them all three to court and the two girls were shortly afterwards reinstated into the succession. Edward seems to have been very fond of his stepmother, Catherine Parr, to whom he wrote: "I have received so many benefits from you that my mind can hardly grasp them." 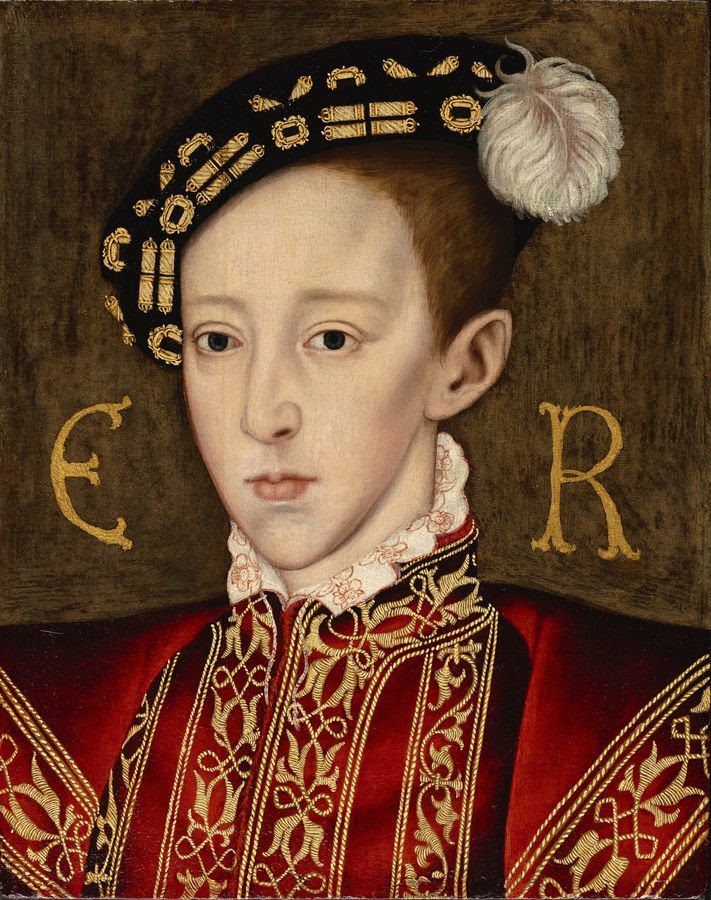 It was considered important that the boy should spend time with children of his own age. Consequently, children (of noble birth of course) was brought in to play with him and he was educated alongside other privileged sons - one being Barnaby Fitzpatrick, who would turn out to be a lasting friend to Edward. Edward showed more interest in school work than his classmates and tried continuously to compete with his sister Elizabeth's academic knowledge.

Of course nothing was to be spared in the boy's apartments. His rooms were lavishly hung with Flemish tapestries and his books, clothes and cutlery were all embedded with jewels and gold. The young Edward was very interested in military campaigns - something he inherited from his father.

Henry VIII died on January 28th 1547 which meant that the nine-year old boy was now King of England. But those closest to the throne - including Edward Seymour - chose to postpone the announcement until they had arranged a smooth transaction of power to their nephew. Edward was moved from Hertford and placed at Enfield where Elizabeth resided and there the two were told of their father's death.
Edward was taken to the Tower for his coronation and on January 31st the Parliament was told of the old King's death. Edward was crowned as Edward VI on Sunday, February 20th in Westminster Abbey. There ceremonies themselves were shortened because of the King's young age and that the Reformation's supporters have found them unnecessary - that night Edward dined with a crown on his head.

According to Henry VIII's last will there were to be sixteen executors who should reign until Edward turned 18. The prominent figure was Edward Seymour who became Protector of the Reign and Guardian of the King's Person - something that Henry VIII had not asked for; instead he had wanted the council to rule as a majority. But Edward's other uncle, Thomas Seymour were making trouble. He claimed that as the King's uncle, he should be entitled to more power and when Edward Seymour tried to buy his little brother off with a barony, the Admiralty of the Navy and a place in Council, Thomas retorted to other measures. He began giving pocket money to Edward and tried to turn him against Edward Seymour saying that the Protector was holding on too tight to the money - Edward's money. But it did not work; Edward had been brought up always being told to defer with the Council. When Thomas Seymour was arrested on charges of embezzlement, Edward himself testified against his uncle - and Thomas was beheaded.

When Edward Seymour was falling from power he kidnapped Edward VI and took him to Westminster where the young King wrote: "Me thinks I am in prison". But the former Protector could not hide and as Edward noted in his journal: "The Duke of Somerset had his head cut of at Tower Hill between eight and nine o'clock in the morning". The King himself does not seem to have felt anything on loosing - and partly being responsible - for the death of his two uncles whom he had loved in the past.
John Dudley, the Duke of Northumberland, was in charge (though not officially Protector) and when Edward was fourteen, a Council for the Estate was created and the members chosen by Edward himself. Edward favoured Protestantism and the Council followed his examples. Despite being only fourteen Edward took a good deal of responsibility in governing his country. 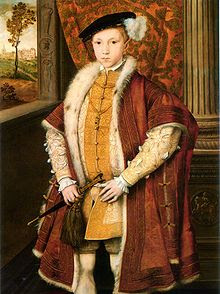 Edward was betrothed to Elisabeth of Valois in 1551. When it came down to religion Edward was an intense Protestant and the person he trusted the most was Thomas Cranmer, Archbishop of Canterbury. The confiscation of church lands continued during Edward VI and the reformation in England was moving fast when in 1553, the worst happened - the King was dying.

Edward fell ill in February 1553 and when June had passed it was clear that the young King would not survive.The people behind the reformation feared the succession of Mary - who was still an ardent Catholic - and Edward himself did not like the idea of his sister ruling England - partly because of her religion, partly because he was brought up to believe that succession should always follow the male line.
In an attempt to exclude Mary and Elizabeth from the succession, Edward drafted the document "My devise for the succession" in which he removed both of the royal princesses and placed Lady Jane Grey as his heir. In case of lack of male heirs from Edward himself it was Lady Jane Grey, her mother and her sisters' sons that were to inherit the throne - but if they had daughters it was not to be.
Edward called judges and lawyers and went through ever possible mean to make sure that his sisters would not follow him as rulers - over a hundred noblemen signed the devise.

Edward's disease meant that the King drifted from relapses to recovery and back again from January to June in 1553. His doctors reported that the matter he threw up was either a greenish yellow or pink - like blood - and when his legs became too swollen to stand on, the doctors gave up - there was no saving the young King. Edward made his last appearance in public on June 1st where he appeared at his window at Windsor Castle - a thin and poorly shadow of himself. Five days later, on July 6th, Edward died and was buried in Westminster Abbey.
Indsendt af Louise Boisen Schmidt kl. 2/12/2013 11:27:00 am