Mary Boleyn, The Other Boleyn Girl

As with her infamous sister, Anne, it is unknown exactly when Mary was born. We do know that Mary was born at Blickling Hall and spent her childhood at Hever Castle with her siblings Anne and George.
It has been suggested that she was the eldest of the three Boleyn siblings because her grandson (Lord Hunsdon) claimed the title of Earl of Ormonde on the grounds that the title belonged to him since he was a descendant of the eldest Boleyn heir. Furthermore she married first - which is normally reserved for the eldest girl. But there are no actual evidence that can tell us which sister was the eldest. 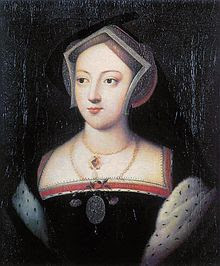 She was given a standard education and - unlike Anne- spent most of her childhood in England until her father required a post as maid-of-honour with Princess Mary who was travelling to France for her wedding. Since the marriage ended within a few weeks most of the maids-of-honour were sent home; but Mary was allowed to stay probably because her father was the new ambassador to France. Mary even stayed in France after Princess Mary herself left and consequently served the new Queen Claude.

Much have been said of Mary's behaviour during her stay in France. If one is to listen to the rumours of the time, Mary had had several affairs with the men at court including King Francis himself. This however is unlikely and the number of her affairs are extremely exaggerated to stain her sister's reputation. It is even said that King Francis referred to her by the expression "his English mare" and that she was known as the "great and infamous whore" - once again this is most likely made up to tarnish the Boleyn family's reputation.

When Mary returned to England she married to William Carey - a wealthy courtier with influence. The marriage itself took place on February 4th 1520 where King Henry was a guest.

Mary became Henry VIII's mistress somewhere around 1521 after Bessie Blount had given birth to the King's bastard son. The affair was never published and consequently Mary never had the fame or influence that usually came with the title of King's mistress. However Mary is believed to be Henry VIII's favourite mistress and he enjoyed her company a lot. Mary's two children, Catherine and Henry, may have been fathered by the King himself; her son was said to resemblance King Henry a lot. But Henry never acknowledged them which is probably due to the fact that his eye had wandered on to Anne Boleyn at this time - it would not have served him well to acknowledge the children of one sister and then court another.

But Mary's time in the spotlight was soon over. Her sister Anne had infatuated the King and Mary was soon rejected in favour of the mysterious Anne. Mary was supposedly the prettier sister but Anne was more intelligent and ambitious and have without doubt remembered her sister's situation after her affair with the King was over - alone and with a tarnished reputation.

Mary's husband died of the sweating sickness and left her with debts - Henry granted Anne the guardianship of Mary's son. Mary received an annual pension of 100 pounds. Mary also went with Henry and Anne when the couple went to France in 1532.

But when she came home Mary broke the rules of established conduct by marrying in secret - to a commoner, William Stafford. The marriage was only discovered when Mary became pregnant for which her family disowned her. Queen Anne was furious and the couple was banished from court. Unfortunately, Mary's finances became so bad that she had to beg Thomas Cromwell to intervene with Henry and Anne - she even told him that she knew she could have married a man of more status but she believed that she could have married no one else who loved her as well. Not even Henry would step in; refusing to recognize the mistress he had once fallen in love with.

In the end it was Anne who sent an elaborate gold cup and some money to her sister but would still not admit her back to court - at this time Mary had begged her uncle, her father and her brother in vain for help. Mary's life ever since her banishment in 1534 to Anne's execution in 1536 is difficult to trace since she did not visit her family and no correspondence between the siblings have survived.

When Anne and George had been executed, Mary remained in disgrace with her husband, living at Rochford Hall. After the death of her parents Mary inherited properties in Essex but her childhood home was sold of to Anne of Cleves. She lived out her life in relative comfort with the man she had chosen from love and their only child: a girl named Anne. Mary Boleyn died on July 19th 1543.