Thomas Cromwell was born in around 1485 but very little is known of the life of Thomas when he was young. He was the son of Walter and Katherine Cromwell and spent his childhood at his birthplace in Surrey.

Thomas left England and set sail for continental Europe, where records show that he spent time in Italy, France and the Low Countries. There have been many stories of what Thomas did while visiting these countries but they are often contradictory. Thomas would return to England and marry Elizabeth Wyckes in 1515 with whom he had two daughters and one son. 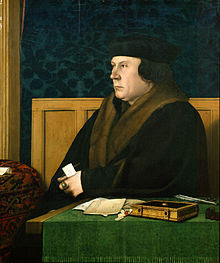 By 1520 (just five years after his return to England) he was already well-known the mercantile and legal circles of London. He even gained a seat in the House of Commons but nothing of that period has survived. Cromwell was apparently skilled because in the middle of 1520's he joined the service of none other than Cardinal Wolsey. Within long he had participated in the dissolution of almost thirty monasteries to raise money for schools build by Wolsey and must have made an impression on the Cardinal for by 1529 he was one of Wolsey's most trusted advisers - however the Cardinal fell from power later that year.

Cromwell was determined not to fall with his former master and he succeeded. He gained a seat in Parliament by November 1529 and was soon noticed by the King. Somewhere in 1530 he was appointed to the King's Privy council.

When 1531 came to an end, Cromwell was in control of the King's legal and parliamentarian affairs but despite of his rising star, he was not fond of flattery. Cromwell had a great success during Henry VIII's divorce trial where he was in favour of the royal supremacy as head of the church. He managed to manipulate the House of Commons into accepting the King's new status. In the end he triumphed and one can only imagine how fond Henry VIII must have been of him after that. Cromwell was awarded with minor posts but they all gave him access to three vital institutions: the Exchequer, the Chancery and the royal household.

In December 1534 Cromwell was given authority to discredit the papacy - something he would be very good at. He sent out pamphlets and sermons that denounced the Pope in the following months. When Parliament was summoned in 1534 Cromwell supervised and in April - same year - he was appointed as the King's principal secretary and chief minister. He was efficient and began with demanding that he clerics, the nobility and the people were to swear to the Act of Succession. He also changed the treachery laws by making it illegal to speak ill of the royal family or call the King tyrant, usurper, infidel or heretic.

Cromwell's power grew and he was soon in control of the taxation of church properties and lands. He played a major part in the fall and consequent execution of Anne Boleyn who had opposed transferring the money from the monasteries to the royal coffers and wanted them to go to charity.
Cromwell was now more powerful than ever. He succeeded Anne Boleyn's father as Lord Privy Seal and was appointed Baron Cromwell of Wimbledon. Cromwell was the focus-point of the anger of the Pilgrimage of Grace because he had a leading role in tearing down the monasteries. His power was threatened by the assembly of the Privy Council which was diminishing Cromwell's political power despite his success in religious affairs. The King tried to soothe Cromwell by making him a member of the Order of the Garter in 1537 on August 5. Cromwell continued his religious reforms without stop. He forbade pilgrimages, the worshipping of statues, saints and the like, relics and demanded that a Bible in English should be in every church. But Henry VIII was becoming unhappy with the massive religious reforms - and the King was dangerous to upset.

Cromwell was aware that the conservative faction at court was growing and decided to make a move against his enemies. In November 1538 he imprisoned Sir Edward Neville (Marquess of Exeter) and Sir Nicolas Carew on charges of treason - he had gathered evidence from an interrogation of Sir Geoffrey Pole at the Tower - both were executed shortly afterwards.
One of Cromwell's greatest achievements was the publication of the Great Bible in English. But the King was still reluctant to accept reform. The Six Articles that was passed in Parliament reaffirmed a number of conservative point of views regarding the Mass, the priesthood and the sacraments - Cromwell can not have been pleased about this.

When Jane Seymour died in child-bed, Cromwell saw a chance to regain some of his influence by finding a new wife for the King. But in order to keep the reformation going - and protecting England from the Catholic France and Spain - it had to be a princess from a Protestant family. The Protestant and very wealthy Cleves-family was Cromwell's final choice and he presented Anne of Cleves to Henry VIII - through a painting by Holbein. Henry loved the painting but was less than pleased when his new wife arrived.
Cromwell was made Earl of Essex on April 18th 1540 but despite this sign of royal favour, Cromwell was falling and would soon be tumbling from power.

Henry VIII's anger at having to marry Anne of Cleves created the perfect opportunity for the conservative fraction to destroy Cromwell. When Cromwell held a Council meeting on June 10th 1540, he was suddenly arrested and imprisoned in the Tower. He was charged with a long bill of Attainder and for the crimes of heresy, corruption, treason and the intention of marrying Princess Mary Tudor. All his privileges were forfeited and Cromwell was growing desperate. He even wrote to Henry VIII and expressed his support for the annulment of the King's new marriage.

But it was too late. Cromwell was sentenced to death and was beheaded on July 28th 1540 - the same day that Henry married Katherine Howard. His head ended up on a spike.
But later on Henry VIII would regret the execution of his best and most loyal servant and claimed that he had been pressured into it by the Privy Council.
Indsendt af Louise Boisen Schmidt kl. 2/14/2013 09:29:00 pm