Thomas Cranmer was born in 1489 to a family that did not belong to the aristocracy and his family had a modest fortune. When his elder brother, John, inherited the estate after his parents, Thomas was to join the church. At fourteen he was sent to the Jesus College but it took him eight years to finish his education there - a remarkable long time. After Thomas received his Masters of Arts, he married a woman named Joan. But because marriage was not yet acceptable in a priest, he lost his residence at Jesus College and began as a reader at another college. But Joan died during the birth of their first child and the Jesus College gave him his place back. 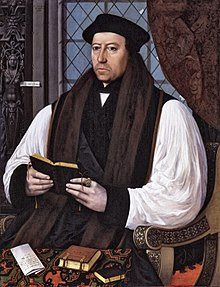 Thomas Cranmer was sent to work at the English embassy in Spain - possessing a minor role - by Wolsey. When he returned in 1527, King Henry VIII granted him a half-hour visit in private and was soon appointed to assist Cardinal Wolsey with the divorce settlement between the King and Queen. Cranmer fled into the country when an out-break of the plague broke out in London. It was Cranmer who suggested that the King should seek out the opinions of theologians instead of waiting for a reply from Rome - an idea much favoured  by the King. Cranmer was sent to Rome with an English delegation to gather these opinions from universities.

During his tour through Europe, Cranmer met Simon Grynaeus who he was to keep in contact with. Thomas received a new appointment as a resident ambassador to the Holy Roman Emperor, Charles V, which meant that he had to follow the emperor on his journeys through Germany. It was during this tour that Cranmer saw the direct consequences of the Reformation in Nuremberg where he also met Andreas Osiander - a leading figure in the Reformation in Germany. Once again, Thomas Cranmer broke the rules of the clerics and married the niece of Andreas Osiander's wife, a woman named Margrete.
But that was not the only change to Cranmer's life. By this point it was reported that he was beginning to sympathize with many Lutheran ideas - but it was not enough to change the mind of the ardently Catholic emperor.

Things took a surprisingly turn while travelling through Italy. Cranmer received a letter from Henry VIII announcing that Thomas was now the Archbishop of Canterbury - a position gained by the influence of the Boleyn family. It was demanded that he return to England immediately. On March 30 1533 he was formally consecrated into his new position.
Cranmer now worked with the King on the issue of how the Church of England saw the King's first marriage. So, Cranmer invited Henry VIII and Catherine of Aragon to a court on May 10 - Gardiner represented the King and Catherine probably sent a proxy. Here Cranmer declared their marriage to be invalid and unlawful in the eyes of God. Just 18 days later Cranmer proclaimed the marriage between Anne Boleyn and Henry VIII to be true and good.

Cranmer would personally crown Anne and later baptise their daughter Elizabeth. For this defiance to the Pope, Cranmer and the King was excommunicated.

Alongside Thomas Cromwell, he helped to establish the English Bible and during the reign of Edward VI, Cranmer was granted the power to change the doctrines of the church which was considered necessary to the completely Protestant church of the new King. In 1549 Cranmer also helped the completion of the English Prayer Book.

But things went wrong after the death of Edward VI. Thomas Cranmer decided to support Lady Jane Grey since he was terrified of the idea of the extremely Catholic Mary on the throne. But when Lady Jane Grey lost the fight of the throne and Mary I became Queen of England, Cranmer was in great danger. Mary had him tried for heresy and treason. During the long interrogations and imprisonment Cranmer was forced to publish an act that proclaimed that his support of the Protestant church was wrong. Despite this, he was still condemned to be burnt alive.

On March 21 1556 Thomas Cranmer was taken to Oxford for his execution. As a final act of defiance, he put his right hand (the one he had signed to untrue declaration) into the fire first. Today, he is considered to be a martyr of the Protestant faith.
Indsendt af Louise Boisen Schmidt kl. 2/20/2013 05:14:00 pm