Bloody Mary - a neglected Princess who became a feared Queen 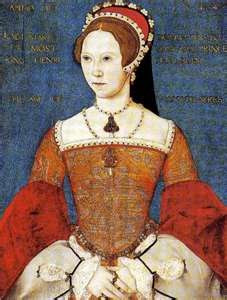 Mary was born on February 18th  1516 and would be the only surviving child of Catherine of Aragon and Henry VIII. She soon set out into the official royal life and when she was just four years old the Princess entertained the French ambassadors with a performance on the virginals. Her mother was the main source of her education and the intelligent child was able to read and write in Latin at the age of nine. She was also instructed in French, Spanish and might even Greek. Henry VIII adored his daughter and boasted to the ambassador of Venice: "This girl never cries."

But her father's doting soon turned into disappointment when it turned out that there would come no sons from the marriage to Catherine of Aragon - until then it had always been expected that Mary would have a brother to take over the kingdom. Mary was sent to Wales in 1525 by her father where she was to reign over the Council of Wales and the Marches, though it can be assumed that she only ruled in name. The young princess was given an establishment that took after a court at Ludlow Castle and had some of the prerogatives that normally belonged to the Prince of Wales. She spent three years at the Marches until she returned to the counties outside London in 1528.


As a princess - and the only princess at that - it was expected that she would marry a foreign prince. Henry VIII used her as a piece of the mighty web that made of England's politics and consequently she was engaged a number of times during her childhood. When she was two years old she was engaged to the Dauphin of France but when she was six, her future husband took the form of her twenty-two year old cousin, Charles V. When the engagement was broken off, Cardinal Wolsey arranged for a match between the English Princess and either the French King himself of his heir - but the Cardinal managed to get the alliance without a marriage.

Mary entire life changed when her father fell in love with Anne Boleyn and had to divorce her mother if he wanted an heir - and Henry desperately wanted an heir. At the end of the divorce trials - in 1531 - Mary was often sick, suffering from depression and irregular menstruations. Her situation was made even more miserable when she was not allowed to see her mother - Catherine of Aragon would eventually die without having seen Mary for several years. When Henry VIII married Anne Boleyn, Mary's situation was pitiful. But it was made even more unbearable when the extremely proud Mary was put into the household of the newly-born Elizabeth - Mary's half-sister. Mary herself was at this time declared a bastard and was now to be titled the Lady Mary instead of Princess Mary.

The (now) Lady Mary refused to give into her father's demands that she should acknowledge Anne Boleyn as Queen and Elizabeth as Princess - from Mary's point of view the idea must have seen completely wrong; she had been brought up by a mother who firmly believed that she was the only Queen of England as long as she lived. While her relationship with her father worsened, Mary gained a new friend in the shape of Ambassador Chapuys from her mother's home country Spain.

Once again, Mary's life was turned around when Anne Boleyn was beheaded and Elizabeth declared illegitimate too. Through her father's new wife - Jane Seymour - Mary was reunited with her father who had not spoken to her for three years. Mary even went as far as the acknowledge him by submitting to his authority - though she added "as far as God and her conscience permitted."
However, being reunited with her father meant that Mary now reappeared at court and was given her own household - as for her half-sister Elizabeth, it was her turn to be out of favour. She spent much of her allowances on fine clothes and gambling. After the death of Jane Seymour, Mary was made god-mother of Prince Edward.

Mary found herself the centre of marriage proposals once more. Philip of Bavaria courted her in 1539 but since he was a Protestant he could not be the husband of such an ardent Catholic of Mary herself.
A few years later - after the execution of Katherine Howard - Mary was the leading lady at court in the absence of a Queen and she was in charge of the Christmas festivities. And finally, in 1544, Mary was declared legitimate alongside her sister Elizabeth and was a part of the succession again.

When her father's reign ended and her brother's began, Mary was in trouble again. Edward was just as ardent a Protestant as Mary was a Catholic. When the three Tudor-children met at Christmas 1550, Mary was publicly humiliated by her little-brother who scolded her for not following his law regarding worship - Mary was extremely embarrassed. Mary and Edward continued to disagree on religious matters.
But then the unthinkable happened: Edward died without an heir and Mary saw her chance to grasp the throne she had been expecting her whole life - Mary saw it as a sign from God which strengthened her faith.

But her brother had foreseen where the throne would go when he died - and he did not like it. Edward, who desperately wanted to keep the throne in Protestant hands, erased his two sister from the succession and made Lady Jane Grey his heir apparent. Despite a failed attempt at luring Mary to London, she fled into East Anglia when she suspected that she would be taken prisoner. From her estate at Kenninghall in Norfolk, Mary wrote to the Council on July 9th, demanding the throne that belonged to her.
To Mary's luck the English people were on her side and Lady Jane Grey - who had sat on the throne for nine days - was dethroned when Mary assembled an army. On August 3rd 1553, Mary made her triumphant entry into London. 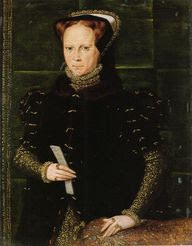 Mary had finally achieved what she wanted: she was Queen of England. Her very first action as Queen was to release political Catholic prisoners such as Stephen Gardiner and the Duke of Norfolk. Mary's position was both difficult and dangerous; most of her Council had supported Lady Jane Grey who was now kept safely under guard in the Tower and. Mary was officially crowned Queen on October 1st 1553 - being the first Queen of England since Lady Jane Grey never really ruled as Queen.

Queen Mary had always believed that it was her destiny to marry. In the end, Mary favoured Philip II of Spain which was a decision that would change the course of her reign. Most of her subjects were terrified of the punishments they would be sentenced to if Catholicism returned to England and when the news of Mary's marriage to a very Catholic King were followed by insurrections. The noblemen too feared the arrival of a foreign prince who would be able to out-triumph Mary, drew up what is now known as "Queen Mary's Marriage Act". According to this act, Philip was not to be styled with the title of "King" and everything that officially went out from Parliament had to have both signatures on it - and only until Mary's death after which Philip would have no powers in England.

Mary was enthusiastic when she stopped menstruating in 1554 and looked forward to the heir that would protect her throne from her (assumed) Protestant half-sister. In the last week of April, this very half-sister was released from house arrest and taken to court to witness the birth - and the court waited. But nothing happened. At the end of June, the Queen had still not giving birth and the situation was made worse by a false rumour that the Queen had giving birth to a son which made all the church bells in England ring. Not long after this phantom pregnancy, Philip left England to fight with his armies in the Netherlands - leaving Mary heartbroken and embarrassed.

Initially, Queen Mary stated that she would not force her people to follow her religious beliefs but when the Protestant clerics Hugh Latimer, John Bradford, John Rogers, John Hooper and Thomas Cranmer were imprisoned, her politics appeared to have changed. Mary now set herself to the task of reconverting her country to the Catholic faith - something she had probably dreamed of ever since her father's first divorce. In October 1553 she called Parliament and abolished all of Edward's religious laws and reinstated the validity of her parent's marriage. Mary wanted to return England under Roman jurisdiction which she found harder than expected; her Parliament strongly disagreed. By the end of 1554 the Pope had agreed to the compromise of Mary and her Parliament and the Heresy Laws were now reality.
The following period was what caused both Mary's enemies and her people to give their Queen the disturbing nick-name "Bloody Mary". The Marian Persecutions were a part of Mary's desperate attempt to made Catholicism the main religion in England. In total close to 300 people were burned alive at the stake and almost 800 left England in fear of their lives - one contemporary describes how the stench of burning human flesh made it impossible to be anywhere near Smithfield (location of the burnings) on the execution days. Almost thirty people died in prisons and the esteem of her people plummeted.

Mary became Queen Consort of Spain when her father-in-law abdicated. Something that would have been a celebration was clouded by a plot against her that was known as the Dudley conspiracy - however it was discovered in time. Philip finally returned to England to persuade his wife to join him in his war on France. Mary herself was positively inclined towards the war but her Council said no; terrible harvests meant that the people were going hungry and a war would make everything worse. But when Reginald Pole invaded England and tried to depose of Mary, England joined the war. Almost immediately Mary lost Calais - England's only possession on the main land. The loss was ideological since the maintenance of Calais was expensive but her people would never forgive her for the humiliation. Mary said later: "When I am dead and opened, you shall find Calais lying in my heart."

When Philip left again in 1557 Mary was convinced that she was with child. But yet again no child was born and Mary was now forced to accept Elizabeth as her successor. As it turned out the "child" had been a tumour and she was too weak to stand against an influenza epidemic in 1558. Mary died on November 17th 1558 - having lead one of the saddest lives in history.
Indsendt af Louise Boisen Schmidt kl. 2/13/2013 12:00:00 pm