Edward Seymour was born in around 1500 and would be the brother of Queen Jane Seymour. When he was 14 he received an appointment in the household of Mary Tudor.
Edward married twice; his first marriage to Catherine Fillol was annulled due to her adultery and his second marriage was to Anne Stanhope in the time before March 9th 1534. 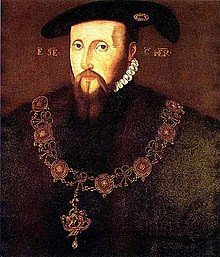 When Jane Seymour became the third wife of Henry VIII, Edward was created first Viscount Beauchamp on June 5th 1536 and Earl of Hertford in October 1537. He was sent to the Scottish border to "teach the King of Scotland a lesson" on behalf of Henry VIII - a task he carried out with extreme ruthlessness. Even after the death of his sister Edward remained in high favour with Henry VIII which turned out to last even beyond this Tudor-king.

When Henry VIII died and his son Edward VI being too young to rule, it was decided by the group of men that Henry had left in charge of Edward's government until he came of age, that Edward Seymour should be Lord Protector of the Realm. So, Edward Seymour reached the peak of his power when he was all but King and instantly tried to put his mark on English politics. He changed the composition of the Privy Chamber so that the majority of members were Protestant as himself. Edward also saw a chance to further elevate himself and created himself the Duke of Somerset.

In March 1547, he managed to secure a Letter Patent from his young royal nephew, Edward VI, meaning that he now had the authority to appoint the members of the Privy Council and calling on them whenever he wished. He was only really met with resistance from two people: Thomas Wriothesley who was promptly discharged from his posts on grounds that was very light at best. But the other trouble-maker was more difficult to tackle: Thomas Seymour, his own brother.

Thomas was very unhappy and angry that he had not been granted more power in the hand-out of power and positions that followed Henry VIII's death. Edward Seymour tried to buy his brother of with a barony, the title of Lord Admiral and a place at the Privy Council - but it did not work. Unfortunately for Edward, Thomas was just as ambitious as himself and soon began making trouble by telling the young Edward VI that the Lord Protector was giving the Prince too few money - consequently handing the King pocket-money. However, the King was not receptive to the bribery of his uncle and when Thomas wife, Catherine Parr, died, Edward Seymour saw the chance to get rid of his troublesome little-brother.

He had Thomas arrested on charges of the intention of marrying either Princess Mary or Princess Elizabeth and embezzlement. He was beheaded shortly afterwards and Edward Seymour had lost his biggest hem-shoe - and brother. Edward Seymour was a great soldier and soon turned his military attentions to Scotland. After a decisive victory in 1547 things began to go wrong. Edward realized that he could not unite England and Scotland by war and the situation was made worse when Scotland allied with France due to Mary, Queen of Scots' marriage to the Dauphin. The financial strain on England's treasury was becoming too much and Edward had to redraw from Scotland in 1549. 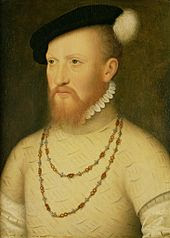 At home, Edward was facing even more problems: a series of rebellions through 1548 demanded the Lord Protector's attention. The problem was the the leaders of the rebellion genuinely believed that they had the support of Edward Seymour and that their protests were against the Land Lords. The same believe was shared by other rioters throughout England. Despite Edward's popularity among the people, the disasters of his wars in 1549 meant that the government needed to place blame with someone - and that someone was Edward Seymour.

Edward knew that he was in danger and decided to act before his enemies. On October 1, he called for help through a proclamation and decided to take drastic measures for his own protection. He kidnapped Edward VI and took refugee in Windsor Castle where it dawned on the young King that he was indeed a prisoner. The government answered by publishing evidences of Edward's mismanagement of the State and on October 11, the Duke of Somerset was arrested.