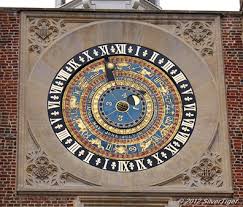 King Henry VIII ordered this astronomical clock for the decoration of Hampton Court Palace in around 1540 - right after Cardinal Wolsey had fallen from power and Henry VIII began to rebuild his newly-acquired palace. Within the clock there are three bells of which the oldest is from 1478. The clock is very complicated compared to the clocks we use today and it shows:


Since Henry VIII often used to travel by barge to Hampton Court Palace it was practical to know when it was high tide and thereby the best time to travel by.
The earth is centred in the middle of the clock because the clock was made before Copernicus and Galileo began to doubt the heliocentric world-image (where the sun is the centre of the universe). The minor circle is the sun that was said to circle around the earth at the time.