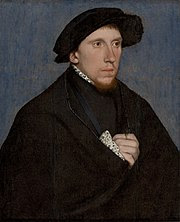 Henry Howard was placed at Windsor with Henry Fitzroy (the illegitimate son of Henry VIII) and became quite close friends with the King's bastard son. Henry inherited his father and grand-father's military skills and was renown as a very good soldier who became "Lieutenant General of the King's Land and Sea".
But the privileged Henry Howard had a temper. Once he was arrested for striking another courtier and was arrested again after having walked through a town, breaking the windows of the sleeping inhabitants. But every time King Henry VIII came to his rescue.

Henry Howard became the Earl of Surrey when his grand-father died in 1524 and his father was elevated to the position of Duke of Norfolk. When Henry VIII took Anne Boleyn with him to France, Henry Howard accompanied them and stayed in the entourage of Francis I for a year. His first son was born in 1536 to himself and his wife Frances de Vere - the couple was married in 1532 but they were too young to live together until 1535. Also, as the competent soldier, Henry fought against the Pilgrimage of Grace.

Henry was made a Knight of the Garter in 1541 and continued his military carrier with success until he was defeated at the Battle of St. Etienne after which he was replaced.

But the rather temperamental Earl of Surrey had an artistic side as well; alongside Thomas Wyatt he was the first to use the sonnet-form that Shakespeare would later use.

Henry VIII was becoming increasingly paranoid and was convinced - probably edged on by the Seymours - that Henry Howard was planning to usurp his crown through Prince Edward. The Duke of Norfolk - Henry's father - and Henry Howard taken to the Tower where they were both sentenced to die. The charges against the Earl of Surrey was very vague and would not have led to an execution if the Seymour fraction had not desperately wanted him dead. Henry Howard was accused of usurping royal badges which had been a right for his family for centuries - but was now an act of treason.

Henry Howard was beheaded on January 13th 1547 - his father survived because Henry VIII happened to die on the day scheduled for the execution. Henry Howard would be the last person to be executed by Henry VIII.