Mother of a new dynasty - role model of her time

Margaret Beaufort was born on May 31 either 1443 or 1441. Her parents were Margaret Beauchamp and John Beaufort (Duke of Somerset); her father was in good standing with the King and made sure that if he died on an up-coming campaign to France then the guardianship of Margaret should belong to the little girl's mother. But John Beaufort fell out with the King and was consequently banished from court - it would later be reported that he died of illness but some suggest that he committed suicide. By the death of her father, Margaret was the heir to his fortunes. 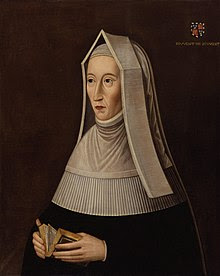 The King did not keep his promise to John Beaufort and after the Duke's death, the King gave the guardianship of the young Margaret to William de la Pole who was the Duke of Suffolk. Margaret had two half-brothers and three half-sister that her mother had given birth to during her first marriage and after Margaret's son would become King of England, she would continue to support her half-siblings.

Margaret was married off to John de la Pole in 1444 - at the time of her marriage it is likely that she was just one year old! The marriage required a papal dispensation because the bride and groom was too closely related. However, the marriage was dissolved after three years by the King. Her guardianship passed on to her half-brothers, Edmund and Jasper. Margaret herself never recognized the marriage and by canon law she was not bound in any way due to the fact that she was under age at the time of her marriage.
But Margaret did not spent much time on the marriage market. Even before her first marriage was dissolved, Henry VI had chosen her as the bride for his half-brother Edmund Tudor. Margaret married Edmund when she was 12 years old and he was 24 years old. By birth her new husband was from the house of Lancaster and he was taken prisoner by Yorkist forces and died just a year after of the plague. Margaret (at 13!) was left as a widower - while being seven-months pregnant with their first child.

Jasper - her other half-brother - took Margaret in and it was at his castle (Pembroke Castle) that Margaret gave birth to her one and only child: Henry Tudor. But the birth was very difficult. Margaret was at the age of 13 very small and the birth caused permanent damage to her body: she was unable to bear another child after Henry Tudor.
Margaret and her young son remained at Pembroke Castle until 1461 when the castle changed owner. From the time when Henry Tudor was two years old he was in the care of his father family who lived in Wales which meant that Margaret only communicated with her son through letters and rare visits. Margaret was fond of her husband's memory and would eventually choose to be buried next to him.

Another papal dispensation was needed when Margaret was to marry her third husband, Henry Stafford (son of the Duke of Buckingham) because they were second cousins. They were married in 1462 and despite a large area of land given to the couple of the groom's father, it was still Margaret's lands that made out the main income. By 1471 Margaret became a widow again.
A year later in June, Margaret married her last husband Thomas Stanley. The marriage is considered to have been one of convenience and Margaret never thought of herself as a part of his family.

But Margaret had political ambitions. She conspired against Richard III with Elizabeth Woodville. The two women agreed that after Richard had been overthrown, Margaret's son Henry would become King and he would marry Elizabeth's daughter, Elizabeth. When the Battle of Bosworth began in 1485, Margaret's husband decided to stay away from the actual fighting and managed to escape his military duties to Richard III. The two intelligent women's plan had worked. Henry Tudor defeated Richard III and was crowned King of England by Thomas Stanley - Henry honoured his promise and married Elizabeth of York. This was the beginning of the Tudor dynasty.

At the end of her life, Margaret preferred to live alone. She even took a vow of chastity despite being married - her husband agreed with it and she lived by herself. Her husband would occasionally visit her and stay in rooms that she had prepared for him. Margaret Beaufort now held an important place at court; as the King's mother, she was referred to as "My Lady the King's Mother" - a title that gave her privileges that no other women in court had. She was even allowed to keep her property as if she was not married. Margaret was a proud woman; she refused to hold a rank that was lower than Elizabeth Woodville's who held the rank of Queen Dowager and even her daughter-in-law who was Queen Consort. Margaret would insist on walking no more than half a pace behind the Queen Dowager and would make sure that her robes were always of the same quality.

Elizabeth Woodville was banished from court in 1487 by Henry VII and it was widely believed that Margaret had had something to do with it. She was known as an intelligent and pious woman and her son adored her. However, he died in 1509 and named his mother the Regent until his heir (Henry VIII) could take over. Margaret held the primary position at Henry VII's funeral.
Margaret died in June that same year - just a day after Henry VIII's 18th birthday and two months after Henry VII's death.
Indsendt af Louise Boisen Schmidt kl. 2/21/2013 08:26:00 pm