Lady Jane Grey was the eldest daughter of Henry Grey (Duke of Suffolk) and Lady Frances Brandon. She had royal blood in her veins through her mother who was the daughter of Mary Tudor, Queen of France. It is assumed that she was born between 1536-37. Jane grew up with her two sisters, Lady Catherine Grey and Lady Mary Grey. 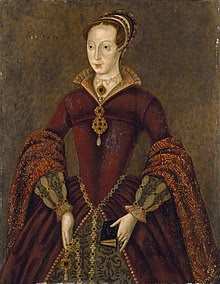 Jane received a good education, learning both Latin, Greek, Hebrew and Italian. Through her childhood and education she became an ardent Protestant. Jane was fond of book-studies and would prefer to study rather than attend a hunting-party. Jane was sent from home in February 1547 to join the household of Thomas Seymour and stayed with him during his marriage to Catherine Parr. She only left after Catherine's death. After the funeral of Catherine Parr - in which Jane acted as chief mourner - she stayed at Thomas Seymour's house again. However, she moved a few months before he was arrested.

Jane was betrothed to Lord Guildford Dudley in the spring of 1553 who was the son of the Duke of Northumberland. The couple was married on May 21st.

Lady Jane Grey lived a typical life for a woman in the upper-classes until the 15-year old King Edward VI was dying. In a desperate attempt to keep the Catholic Mary Tudor (Edward's half-sister) from the throne, Edward changed the succession - with fatal consequences for Jane. Since Jane was the granddaughter of Mary Tudor (Henry VIII's sister), she had a distant claim to the throne - but it was close enough for Edward to choose her as his successor. According to the act Edward drew up in 1553 Jane was his heir apparent and after her came the sons of herself and her sisters.

The King died on July 6th 1553 and just three days later Jane was informed that she was Queen of England. Jane only accepted the crown reluctantly and was most likely pressured by her husband and father-in-law. The next day, the news of the new Queen Jane was announced and Jane was housed in the Tower before her coronation. However, her husband did not get what he had probably wished for. Jane refused to name him as King and only referred to him as the "Duke of Clarence" - something that must have angered him immensely.
But while Jane was preparing for her coronation, her father-in-law - the extremely powerful Duke of Northumberland - was trying to isolate Mary Tudor, whom some claimed had a far better claim to the throne. But the Duke failed and the Privy Council changed side when they saw where the people's allegiance lay: they wanted Mary as Queen.

On July 19th the support of the Privy Council of Mary as the rightful Queen was well-received by the English people. Jane now went from residing in the Tower to being a prisoner in the Tower's Gentleman Gaoler's apartment and her husband in the Beauchamp Tower. Jane had finally lost when Mary entered London and the Duke of Northumberland was executed. In September Mary was declared Queen and Lady Jane Grey an usurper to the throne.

Jane was now facing charges of high treason (alongside her husband) - a crime punished by death. They were both tried on November 13th 1553 and was - as expected - found guilty. Despite the imperial ambassador's message to Charles V in which he said that Jane would be spared, something dramatically changed the situation. In January of 1554, a Protestant rebellion (led by Thomas Wyatt) finally sealed Jane's fate despite her complete innocence in the revolt. Originally, Jane and Guildford's execution was planned for February 9th but was postponed for three days for one reason: Queen Mary wanted to give Jane a chance to convert to Catholicism. For this purpose the Queen sent John Feckenham but Jane would not convert - instead Jane became his friend and allowed him to be present at her execution.

Guildford Dudley was beheaded and his remains were driven by the place where Jane was preparing for her own execution. She was then taken to the Tower Hill (on February 12th) where her executioner asked for her forgiveness - customary at the time - and she gave it to him. She then asked him to "dispatch me quickly" and blindfolded herself. But she was unable to find the execution block and helplessly asked "What shall I do? Where is it?". The Deputy Lieutenant of the Tower helped her to the block where she would be beheaded.
Lady Jane Grey was buried with her husband in the Chapel of St. Peter ad Vincula.
Indsendt af Louise Boisen Schmidt kl. 2/15/2013 04:55:00 pm