Katherine "Kat" Ashley née Champernowne was born in 1502. We do not know with certainty who her parents was but it is generally accepted that her father was Sir John Champernowne of Dartington and Margaret Courtenay. 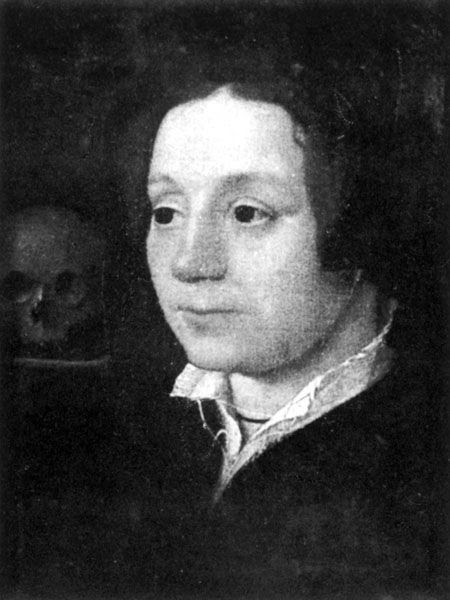 Katherine was appointed governess to the Lady Elizabeth after her former governess - Lady Bryant - was transferred to Prince Edward's household. Elizabeth would refer to her as "Kat" for the rest of her life. At first Lady Elizabeth was too young to have a governess which meant that Katherine's original title was a waiting gentlewoman to the young Princess. When Elizabeth reached her fourth birthday Katherine was made governess.

Kat must have been extremely well educated which is reflected in what she taught Elizabeth. Through her Elizabeth was taught astronomy, geography, history, mathematics, Flemish, French, Spanish, and Italian! Beside that the future Elizabeth I was educated in needlework, dancing and riding.
In 1545 Katherine married Sir John Ashley and became Kat Ashley. She lived with her protégée and the Dowager Queen Catherine Parr and Thomas Seymour, whom it is possible that she had a crush on. Thomas Seymour often enjoyed teasing the young Princess and is known for his inappropriate behaviour which involved walking into the Princess' bedchamber and tickled the Princess.

At around this time other political movements against Queen Mary was discovered. Kat was arrested on January 21st 1549 and taken to the Tower, charged with involvement in Seymour's actions. She told what she knew and was released thirteen days before Thomas Seymour was executed. She had probably been threatened with torture and made up the episodes involving Elizabeth and Thomas Seymour. Despite being thoroughly interrogated she never betrayed Elizabeth. She returned to Hatfield where Elizabeth lived and stayed with her until Elizabeth was taken to the Tower by order of Queen Mary in 1554.

Kat was allowed to rejoin Elizabeth in May 1555 but things soon went wrong again. Books of seditious nature were found and Kat was arrested once again. She spent three months at Fleet Prison and was forbidden to see Elizabeth again after her release. When Mary I died and Elizabeth became Queen of England, Kat found herself in a far better situation.
She was created First Lady of the Bedchamber and she soon became an important source of information for the Queen and others asked favours through her. Kat died in 1565 and Elizabeth sincerely mourned her and would miss her for the rest of her life.
Indsendt af Louise Boisen Schmidt kl. 2/10/2013 07:13:00 pm