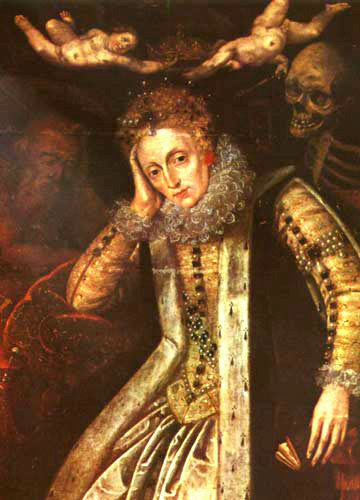 This is one of those rare portraits of Elizabeth I that depicts a woman who is no longer young - to say the least. At the end of her reign, the artists wanted to keep the illusion - for Elizabeth herself and her people - that she was a woman whom time could not affect. It is easy to imagine the Queen being angered by a portrait showing an old woman. This portrait is referred to as the "Allegorical Portrait" and is packed with symbolism.
The Queen is resting her tired head on her hand while two angels (or cherubs) are removing her heavy crown - finally taking a burden of her shoulders. To her right is a man with a long white beard: Father Time. Death is looking over her shoulder to her other side. Everything in this portrait is aimed at depicting the passage of time and that Elizabeth's time is running out.

The portrait was painted in around 1610 which is seven years after the Queen's death. Even if it had been painted when she was alive, it would probably never have been shown to the Queen - considering the notorious Tudor-temper it is likely that Elizabeth would have been less than pleased with it.
Indsendt af Louise Boisen Schmidt kl. 2/20/2013 05:56:00 pm