Exactly when Anne Boleyn was born is not known but historians generally clings to two different birth years: 1501 or 1507. Anne Boleyn was the daughter of Thomas Boleyn (later 1st Earl of Wiltshire) and Elizabeth Howard. She spent her childhood at Hever Castle with her two siblings Mary and George. She received the standard education for ladies at the time which included grammar, history, her family genealogy, reading, spelling and writing; of course she learned the skills necessary for every young woman of her position: dancing, riding, music, household management, needlework, singing and good manners.

Thomas Boleyn was a successful diplomat and charmed Margaret of Austria who in return offered Anne a place in her household - normally a girl had to be twelve years of age but an exception was made. Anne stayed with the archduchess (who was very fond of her "petit Boulin) until Thomas Boleyn arranged for her to follow Mary Tudor on her way to France where she was marrying the French king.
Anne first served as a maid of honour to Mary Tudor and then to Claude of France, whom she served for seven years. During her stay in France Anne finished her education and was fluent in French before long. 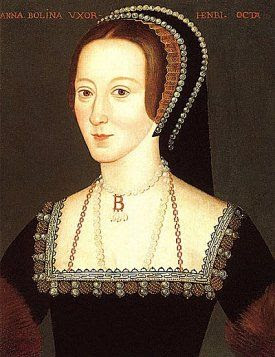 Anne, with her dark hair and almost black eyes, did not fit the ideal beauty of the Tudor age where beauty was associated with blond hair and blue, green or grey eyes. She set sails for England in 1522 and joined the court of Henry VIII.
Originally, Anne was recalled to marry James Butler but the marriage was cancelled. When Anne made her début at court she was playing the role of "Perseverance" in the play "Chateau Vert". She quickly attracted the attention of several young men but had a preference for Henry Percy, the heir to the dukedom of Northumberland and already betrothed. He was obviously in love with her and they planned to get married but their plans came to a hold when Henry Percy's father protested violently and Cardinal Wolsey put an end to the smallest hope - something Anne would never forgive him for. Thomas Wyatt, a poet, was also in love with Anne and wrote several poems about her constant refusal of him.

But a poet is nothing to a King and the King of England had noticed Anne. They formed an item but unlike Henry's other mistresses - including Anne's sister - Anne refused to sleep with the King. Before long the King was completely in love with her and tried several times to offer her the post of his only mistress but Anne repeated declared that she would not sleep with him - unless they were married. The King quickly came to like the idea of a divorce from a woman who despite having been constantly faithful and kind was now too old to have children. Henry began the long progress of divorcing Catherine of Aragon which eventually led to England's separation from the Roman Catholic Church but at the end Henry was a single man. Anne Boleyn managed to keep him interested for seven years through the long trial - still refusing to sleep with him

It has often been suggested that Anne was pregnant when she married the King in secret but there is doubt of whether or not this is true. It is extremely unlikely that Anne would have slept with the King before they were married when she had already waited seven years and had not secured the marriage yet. Furthermore the memory of her sister, Mary, who had slept with the King and was then discarded must have kept Anne from entering the royal bed before marriage.

King Henry's deep passion for his fiancée also gave her great power at court. She was able to grant petitions, receive diplomats and give patronage. A French ambassador noted in 1531 that it was absolutely necessary to have Anne's support if you wanted to have any influence at the English court. Henry made her the Marquise of Pembroke in her own right - something not normally possible for a woman to obtain. The couple had a second wedding ceremony to make sure that it could not be declared invalid.

Anne finally became Queen of England on June 1st 1533 - by that time she was already married and had become pregnant soon after the wedding. She gave birth to a girl on September 7th 1533 - but the King and Queen was disappointed. They had both been convinced that the child was a boy and neither had any use for a girl (none of them could know that the little girl would become Elizabeth 1). Henry and Anne's relationship was happy at the moment but the happiness was not to last. Anne was intelligent, sharp-tongued and independent which was not thought to be suitable for a Queen.

Anne suffered a miscarriage around Christmas in 1534 and the King drew back from her. But the couple was reconciled and at the summer progress Anne was pregnant again. Anne was desperate to give the King a son - without one Henry would be free to marry since Catherine had died. To worsen the stress on the Queen her husband was attracted to Jane Seymour, one of her ladies-in-waiting. Then the worst thing happened: Anne miscarried. There are two reasons that most likely caused the miscarriage. Henry had been knocked of his horse during a joust and lay unconscious for several hours. Secondly, Anne had caught her husband with Jane Seymour sitting on his lap - kissing. Anne became furious and no matter what the King said to sooth her the damage was done: Anne miscarried a child - a male child.

The King's desperate wish to have a son and Anne's two miscarriages led the King to believe that something must be wrong about their marriage. Henry knew that he never get another divorce and he was already falling in love with Jane Seymour. To get rid of the woman he had loved so much he had Anne investigated - and as always when the King wanted something to be found, something was found.

Anne knew that something was happening and she must have realized just how serious it was when not only her brother George but her friends Mark Smeaton, Sir Henry Norris, Sir Francis Weston, Sir William Brereton all were arrested and taken to the Tower. Mark Smeaton - who was not a nobleman - was tortured until he agreed with the statement that he had had a sexual relationship with the Queen. Sir Norris denied everything and repeated that Anne was innocent. The arrest of Anne's brother for committing adultery with the Queen was one of the worst charges of the time: incest.

Anne herself was arrested on May 2nd and taken to the Tower of London. Norris, Brereton and Weston all pleaded innocence for themselves and the Queen but were found guilty. Anne and George Boleyn was tried three days later separately and Anne was facing the terrible charges of adultery, incest and high treason. The evidences were few and very unconvincing but they were found guilty. George Boleyn, Sir Henry Norris, Sir William Brereton, Sir Francis Weston and Mark Smeaton were executed on May 17th.

The constable of the Tower reported that Anne seemed happy at the prospect of ending her life. Henry had had her sentenced changed to beheading instead of burning alive - perhaps a sign of the affection he probably still had. Anne prepared for her execution but the executioner (specially ordered from France) was delayed and she had to wait a whole day. But on the morning of May 19th 1536, Anne Boleyn made her final walk to the scaffold. She knelt down - sitting upright - after having addressed the crowd where she implied her innocence. She was beheaded with a single stroke. Many sources have reported that when she knelt down to die the entire court yard was unnaturally silent - even the crows were silent.

Henry had not organized a proper funeral for the Queen he had adored. An empty arrow chest was dug out (Henry had not even bought a coffin) and Anne was placed in the box. Anne Boleyn was buried in an unmarked grave in the Chapel of St. Peter ad Vincula.