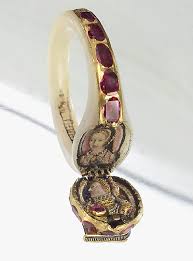 This ring was worn by Elizabeth 1 until the day of her death and when her courtiers removed the ring they discovered that it was a locket. The two pictures depicts Elizabeth herself (lower portrait) and her mother, Anne Boleyn (upper portrait). Ever since Anne Boleyn's execution she had almost never been talked of. Elizabeth herself could not mention her mother in public since her death had caused such great scandal and her name had been tarnished ever since.

The ring itself is made of mother-of-pearl  and is adorned with rubies. On the lit there is an "E" written with diamonds.